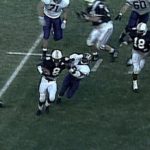 Throughout its history, Washington has had its fair share of long streaks. During the late-1900s and early-1910s under head coach Gil Dobie, Washington put together a 40-game winning streak and a 64-game unbeaten streak. Those are the second-longest and longest streaks, respectively, in college football history. Since then, the longest such streak for the Huskies came … END_OF_DOCUMENT_TOKEN_TO_BE_REPLACED 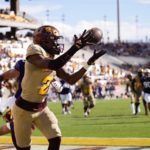 Through five weeks of the 2022 season, turmoil had surrounded the Arizona State football program. After a loss to Eastern Michigan, head coach Herm Edwards was fired in the midst of an NCAA investigation. Interim head coach Shaun Aguano was left in an unenviable position. The Sun Devils ended September without a win over an FBS team and things didn't seem to be getting … END_OF_DOCUMENT_TOKEN_TO_BE_REPLACED 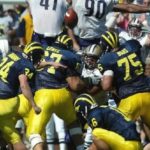 Michigan and Washington have met 13 times over the years with four of those taking place in the Rose Bowl. One of the most thrilling matchups between the schools, however, came in the season opener and on this day 20 years ago. After missing two kicks earlier in the contest, Michigan's Philip Brabbs connected on a 44-yard field goal as time expired to lift the Wolverines to … END_OF_DOCUMENT_TOKEN_TO_BE_REPLACED 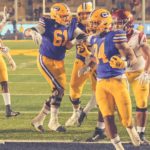 Photo courtesy of California athletics Welcome back to our series of articles going over the preseason win totals for all 131 FBS teams. Thanks to Playoff Predictors for being a free site that allows each and every game to get picked. To ensure that we didn’t just blindly choose overs or unders, all 131 teams had their schedules picked. Explaining the Math All Power 5 … END_OF_DOCUMENT_TOKEN_TO_BE_REPLACED 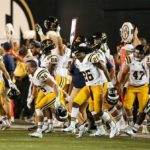 Photo credit: Dakota Hamilton/East Tennessee State athletics It's the offseason, so we are prime for various types of discussions. There has been no known major push from college football, but fans seem to like the idea of schools playing against other schools as the spring game instead of intrasquad scrimmages. Some might even suggest scheduling a FCS team for the … END_OF_DOCUMENT_TOKEN_TO_BE_REPLACED