While we are in the middle of November and excitement fills the air, it's not that way for some teams. There are some that already know their postseason fate. They will finish up the next two games knowing there is no bowl game waiting for them. With bowl games the school gets a payout, national attention, and players get the sweet gifts. It is an awesome reward for finishing … END_OF_DOCUMENT_TOKEN_TO_BE_REPLACED 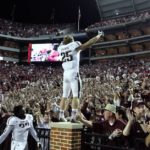 Since 2009, six Heisman Trophy winners went on to win the national championship. That was not the case in 2012, but they did share a field. On this day 10 years ago, it was the eventual Heisman winner who knocked off the eventual national champion. Johnny Manziel accounted for 344 yards and two touchdown passes as Texas A&M upset No. 1 Alabama in Tuscaloosa, 29-24. … END_OF_DOCUMENT_TOKEN_TO_BE_REPLACED 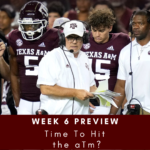 Texas A&M head coach Jimbo Fisher is off to a rough 2022. Many felt that this was the year for the Aggies to break through and possibly join Georgia and Alabama in the College Football Playoff. Unfortunately, Fisher didn’t get the memo. The Aggies are a disappointing 3–2 and are currently battling Iowa for the “cover your eyes, our offense stinks” award. A&M was … END_OF_DOCUMENT_TOKEN_TO_BE_REPLACED 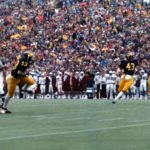 Both seen as College Football Playoff contenders entering 2022, Michigan and Texas A&M have met just three times. The most significant matchup -- at least on paper -- came on this day 45 years ago. In a top-5 matchup in front of nearly 105,000 fans, the third-ranked Wolverines dominated the second half. Michigan scored the final 41 points in a 41-3 drubbing of No. 5 … END_OF_DOCUMENT_TOKEN_TO_BE_REPLACED 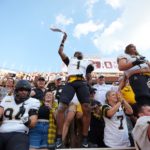 One might conclude that Appalachian State is no stranger to going into hostile territory and knocking off highly ranked teams. The most famous incident came in 2007 when the Mountaineers, then an FCS power, went to Ann Arbor and defeated No. 5 Michigan. On Saturday, Appalachian State picked up perhaps its biggest win as an FBS program. One week after dropping a … END_OF_DOCUMENT_TOKEN_TO_BE_REPLACED