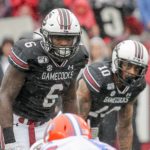 With the 238th overall pick, the New York Giants have selected South Carolina linebacker TJ Brunson. Appeared inside the SEC top 10 for solo tackles in 2017 and 2018. He was sixth in total tackles in the SEC for the 2018 season. Brunson scored one touchdown in his career on a fumble recovery as well. In his four years with the Gamecocks he totaled 164 solo tackles, 21 for … END_OF_DOCUMENT_TOKEN_TO_BE_REPLACED