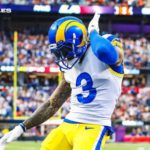 Photo courtesy of Los Angeles Rams Football for the 2021 season is officially over. On Sunday, the Los Angeles Rams became the second team in as many years to win the Super Bowl on their home field. Matthew Stafford's late touchdown pass to Cooper Kupp was the difference as the Rams topped the Cincinnati Bengals in Super Bowl LVI, 23-20. The victory was the second in … END_OF_DOCUMENT_TOKEN_TO_BE_REPLACED 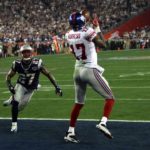 Photo courtesy of New York Giants Given the spectacle that it has become, it's hard to believe that the first-ever Super Bowl did not sell out. On Sunday, the Cincinnati Bengals and Los Angeles Rams will duke it out in Super Bowl LVI. The Rams are a slight favorite as most just hope for a competitive game. Throughout Super Bowl history, nail-biters are hardly the norm. In … END_OF_DOCUMENT_TOKEN_TO_BE_REPLACED