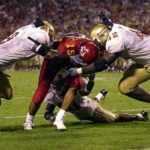 Photo provided by Garnet and Great/Florida State football archivist Florida State won the ACC in each of its first nine years as a member from 1992 to 2000. In 2001, FSU fell short for the first time and finished 8-4. The Seminoles were expected to return to form in 2002, but in the opener, they got all they wanted and more from a foe with an emerging quarterback. On this … END_OF_DOCUMENT_TOKEN_TO_BE_REPLACED