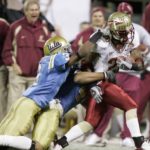 Photo courtesy of Garnet and Great/Florida State football archivist Unfortunately for Florida State, the last four seasons have all been losing campaigns. For more than four decades before that however, the Seminoles saw nothing but winning seasons. That was what was at stake for FSU on this day 15 years ago. Needing a win to clinch a 30th straight winning season, the … END_OF_DOCUMENT_TOKEN_TO_BE_REPLACED 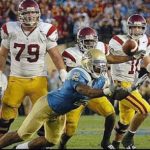 Photo via YouTube During the mid-to-late 2000s, USC was the premier program in not only the Pac-10, but arguably, in all of college football. Perhaps no one was more pained by that fact than UCLA. The Bruins dominated the series in the 1990s, but from 1999 to 2011, USC won 12 of the 13 meetings. The lone win for UCLA over that stretch however, may have cost the Trojans a … END_OF_DOCUMENT_TOKEN_TO_BE_REPLACED