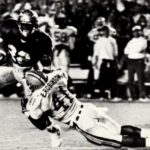 Photo courtesy of Garnet and Great/Florida State archivist The rivalry didn't get a pithy title like the "10-Year War" between Ohio State's Woody Hayes and Michigan's Bo Schembechler, but during the 1990s, no rivalry meant more on a national scale than the one between Bobby Bowden's Florida State Seminoles and Steve Spurrier's Florida Gators. From 1990 until 2000, the two … END_OF_DOCUMENT_TOKEN_TO_BE_REPLACED