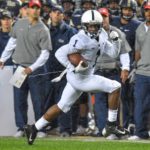 With the 48th overall selection, the Denver Broncos selected KJ Hamler, Wide receiver Penn State. Hamler was a finalist for the Paul Hornung Award, which is awarded to the most versatile player in the country. Hamler was never without a catch in his collegiate career. This past year, he ranked 6th in the Big Ten in receiving touchdowns with 8. He averaged 59.5 receiving … END_OF_DOCUMENT_TOKEN_TO_BE_REPLACED