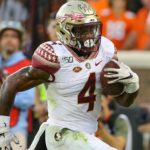 Photo courtesy of wlpearce.com/FSU athletics Once a 5-star prospect out of Virginia Beach, it was reported last week that running back Khalan Laborn and Florida State were parting ways. Laborn was dismissed for violating team rules after spending three years in Tallahassee. Injuries played a large role, but Laborn finishes his FSU career with less than 300 career yards … END_OF_DOCUMENT_TOKEN_TO_BE_REPLACED 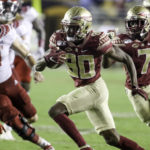 Photo courtesy of Jeremy Esbrandt/Florida State athletics Florida State football is coming off its third disappointing season in a row, ending the 2019 campaign at 6-7 (4-4 ACC). Despite the final result, the Seminoles saw some players shine in limited playing time. A new coaching staff usually means a clean slate, which brings new opportunity for players to make an … END_OF_DOCUMENT_TOKEN_TO_BE_REPLACED

It wasn't the showing that anyone had hoped for on Saturday. Florida State had two weeks to prepare for No. 2 Clemson, only to be routed, 45-14. The loss was the fifth straight for the Seminoles against the ACC Atlantic foe Tigers. The winner of the annual contest has won the ACC in each season since 2011. For all the bad from Saturday, the Fifth Quarter team of … END_OF_DOCUMENT_TOKEN_TO_BE_REPLACED

Today we continue our studies in plays that were ran in the spring game. The plays we are going into detail on, are plays that were ran multiple times. If the play was ran multiple times in the spring game, that is a great indicator that it is a base foundation of the offense. Today you will see the play drawn up, and a gif to show what it looks like. Today we are breaking down … END_OF_DOCUMENT_TOKEN_TO_BE_REPLACED

The play we are going over today, is a play that involves smash mouth football. This play is ran by teams that know they can move the ball on the ground against you. Its mono-e-mono, one on one, and a guard pulling around to steam roll you. This play appeared late in the first half in the spring game, ran by the garnet team. A portion of the Taggart formula is tempo, and when a … END_OF_DOCUMENT_TOKEN_TO_BE_REPLACED