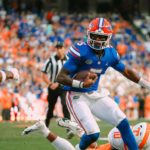 Photo courtesy of Florida athletics The winner of the Gasparilla Bowl might as well be declared state champions. Thursday's contest in Tampa will feature Florida and UCF. After ascending into the top 10 early in the season, the Gators limp into bowl season with a record of 6-6. UCF, on the other hand, has won five of its last six games to finish 8-4. Both teams will be … END_OF_DOCUMENT_TOKEN_TO_BE_REPLACED