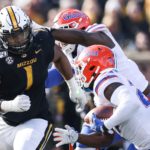 The journey from Missouri City, Texas has been a winding one for Jordan Elliott. Originally a Texas Longhorn, Elliott followed his defensive line coach from Austin to Columbia and became a starter for the Missouri Tigers. The journey, for now, is over. Its destination? Cleveland. Strengths When you hear the word, "handsy", it's usally not a good thing. When you're a defensive … END_OF_DOCUMENT_TOKEN_TO_BE_REPLACED