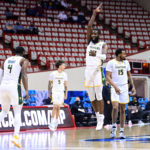 Jalen Hawkins reminded fans why they love March Madness on Thursday night in Norfolk State's First Four win over Appalachian State. Hawkins, from the Bronx, went off for 24 points on 8-for-13 shooting (4-for-5 from 3) and lit up the internet as Norfolk State pulled away by 16 early in the game, only to see their lead diminish late before pulling out the 54-53 win to … END_OF_DOCUMENT_TOKEN_TO_BE_REPLACED