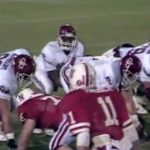 Photo via YouTube The teams no longer share a conference or meet on a regular basis, but for a long time, the rivalry between Nebraska and Oklahoma was one of the biggest in college football. The game usually came with national championship implications. On this day 40 years ago, it served as a de facto Big 8 Championship. The lead changed twice in the final quarter, but … END_OF_DOCUMENT_TOKEN_TO_BE_REPLACED