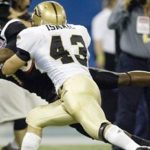 AP Photo/Adrian Wyld Currently, there are more than 40 bowl games. None however, are played outside the United States. That was not the case on this day 15 years ago. In the first bowl played outside the U.S. in nearly seven decades, Cincinnati and Western Michigan met in Toronto for the International Bowl. The annual bowl did not last long, but the first one was quite the … END_OF_DOCUMENT_TOKEN_TO_BE_REPLACED