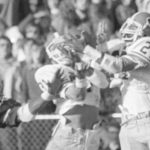 During his legendary 3-year college football career, Georgia running back Heschel Walker's team lost just three times and only once during the regular season. He was a big reason why. There were many close calls along the way, including one that took place on this day 40 years ago. Walker's late touchdown run was ultimately the difference as the Bulldogs rallied past Auburn, … END_OF_DOCUMENT_TOKEN_TO_BE_REPLACED

Photo via YouTube Under LaVell Edwards, BYU gained national respect by being able to compete with the nation's best. Often times, the Cougars would go into hostile territory and knock off major programs. On this day 40 years ago, however, it was a case of "not quite." BYU took a lead to the fourth quarter in Athens, but Georgia scored the game's final 10 points to … END_OF_DOCUMENT_TOKEN_TO_BE_REPLACED 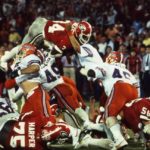 AP Photo/appeared in Florida Times Union Think about the rivalry between Florida and Georgia during the early-1980s and the moment that comes to mind is Lindsay Scott's improbable game-winning touchdown for the Bulldogs in 1980. That however, wasn't the only time that Georgia broke the Gators' heart. It also happened the next year and on this day 40 years ago. Herschel … END_OF_DOCUMENT_TOKEN_TO_BE_REPLACED