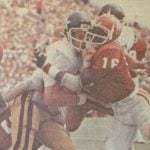 Photo appeared in the Sunday Oklahoman When one thinks about the Oklahoma and Vanderbilt football programs, they're viewed in very different lights. Oklahoma claims seven national championships and has won six of the last seven Big 12 titles. Vanderbilt, on the other hand, doesn't have a single 10-win season. On this day 45 years, the Commodores gave the top-ranked … END_OF_DOCUMENT_TOKEN_TO_BE_REPLACED