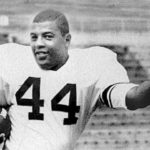 Photo via YouTube Syracuse has long been regarded for its number of great running backs. Floyd Little, Larry Csonka and Jim Brown are among the legends who come to mind. At the college level however, perhaps none were more significant than Ernie Davis. On this day 60 years ago, Davis became the first Black player to win college football's most prestigious award -- the … END_OF_DOCUMENT_TOKEN_TO_BE_REPLACED