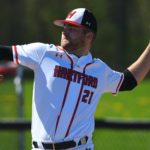 Photo courtesy of Hartford athletics It’s like an intriguing aura has been cast over West Hartford, Conn. It was cast just hours after the University of Hartford announced its intentions to transition from Division I to Division III athletics by the time the 2025-26 academic year rolls around.  It’s almost like fate is saying, “wait a minute?”  In fact, it's almost like … END_OF_DOCUMENT_TOKEN_TO_BE_REPLACED