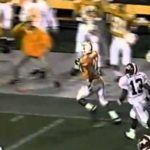 Photo via YouTube The rivalry isn't the spectacle it used to be, but for a long time, the third Saturday in October was a date to be circled on the calendars. Alabama and Tennessee both had success in the 1990s and both won multiple SEC titles during the decade. Tennessee won the final five meetings of the decade, including one that occurred on this day 25 years ago. Jay … END_OF_DOCUMENT_TOKEN_TO_BE_REPLACED