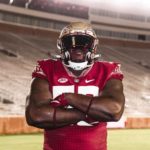 Photo provided Four-star defensive lineman Kelvin Gilliam Jr. from Highland Springs (Richmond, VA) is one of the most highly-touted recruits in the 2021 class, and for good reason. Gilliam played both JV and varsity as a freshman and won VHSL class five state titles in each of his first two seasons. He was part of the last two of Highland Springs' four-consecutive state … END_OF_DOCUMENT_TOKEN_TO_BE_REPLACED