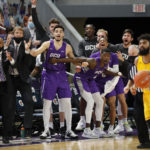 Photo credit: Grand Canyon athletics Nestled deep in the heart of the American Southwest lays a team that is capable of busting brackets. This team is in Arizona, and when the Grand Canyon State is mentioned, most think of Arizona or Arizona State. Both of the big schools in the state have established basketball programs, but oddly enough, neither of them are considered among … END_OF_DOCUMENT_TOKEN_TO_BE_REPLACED