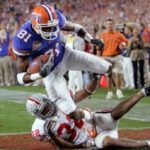 Photo courtesy of Florida athletics The Bowl Championship Series was incepted in 1998. Originally, there were four bowls that made up the BCS. In 2006, there came a fifth game called the "BCS National Championship". It rotated between the four previous BCS bowl locations. It was first played on this day 15 years ago. In a surprising rout, Florida reigned supreme with a 41-14 … END_OF_DOCUMENT_TOKEN_TO_BE_REPLACED