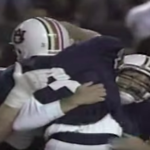 Photo courtesy of YouTube/ESPN broadcast The last meeting between Florida state and Auburn certainly had a memorable finish, but that was also the case on this day 30 years ago. Less than two years after meeting in a Sugar Bowl thriller that ended in a Deion Sanders interception, Auburn got revenge. In a battle of top-10 teams, Jim Von Wyl kicked a 39-yard field goal with two … END_OF_DOCUMENT_TOKEN_TO_BE_REPLACED