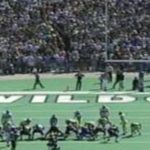 Photo via YouTube After being a doormat for the better part of a half-century, Northwestern rose to football relevance under Gary Barnett in the mid-1990s. The Wildcats won the Big Ten outright in 1995 before sharing the title in 1996. One of the most memorable moments that year was a comeback win over Michigan and it came on this day 25 years ago. Despite trailing 16-0 … END_OF_DOCUMENT_TOKEN_TO_BE_REPLACED