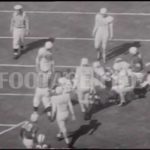 Photo via YouTube For either Texas or Oklahoma to win a national championship, winning the Red River Rivalry is typically a prerequisite. On this day 70 years ago, the Longhorns and Sooners played one for the ages. In the end, Oklahoma was just a little bit better in the top-5 showdown in Dallas, winning 14-13. Setting the Stage Oklahoma had won 23 games as it made its way … END_OF_DOCUMENT_TOKEN_TO_BE_REPLACED