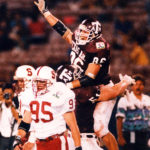 Photo courtesy of Texas A&M athletics Ask any NFL fan who the best coach of the 1980s was and Bill Walsh is likely to be a popular answer. Walsh coached the San Francisco 49ers to three Super Bowl victories during the decade. His head coaching career, however, began and ended with stints at Stanford. On this day 30 years ago, Walsh's second stint started off on the … END_OF_DOCUMENT_TOKEN_TO_BE_REPLACED