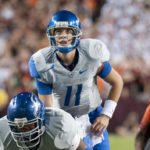 Photo courtesy of John Kelly/Boise State athletics For Boise State, knocking off big-name programs has become commonplace. The Broncos have gained national respect with their ability to stand toe-to-toe with the nation's elite and ultimately prevail. On this day a decade ago, Boise State showed that ability. With the game in the balance, the Broncos scored late to stun … END_OF_DOCUMENT_TOKEN_TO_BE_REPLACED