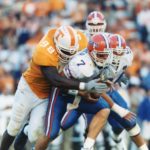 Photo provided by Tennessee athletics Controversial calls are a part of college football. That was even more of the case before there was instant replay reviews. It was a controversial call that ultimately decided the SEC East's most important rivalry of the 1990s on this day 20 years ago. Jabar Gaffney was awarded the winning touchdown with seconds to play as Florida … END_OF_DOCUMENT_TOKEN_TO_BE_REPLACED