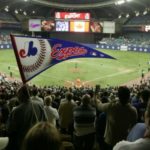 Photo via YouTube shot The COVID-19 pandemic has shortened the Major League Baseball season from 162 to 60 games. The season begins later this month. Recent disputes by owners and the MLB Players Association has brought the 1994 work stoppage to the forefront of some minds. The season ended in mid-August with fewer than 50 games remaining for most teams. The work stoppage … END_OF_DOCUMENT_TOKEN_TO_BE_REPLACED