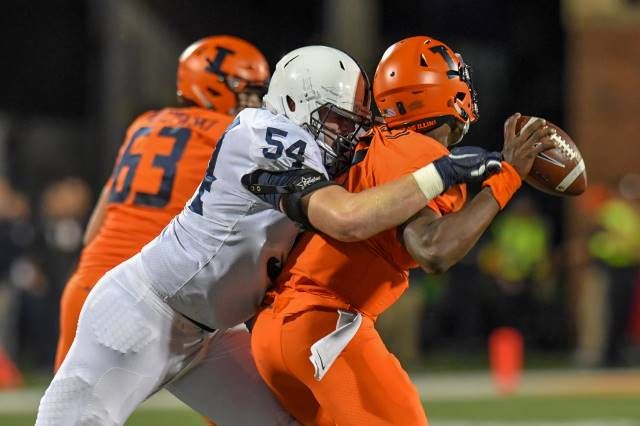 Windsor is a one-year starter at the position, but a solid presence throughout his four seasons in Happy Valley. Windsor was named second-team All-Big Ten team in both his junior and season seasons. Windsor finishes his Penn State career with 118 total tackles and 14 sacks. Windsor earned two degrees during his time at Penn State.

Robert Windsor’s projection on the 53-man roster is hard to predict. Windsor is likely a depth defender in the NFL but may have difficulty locking up a spot full-time. Windsor rigid hips, preventing his tackling radius, and is not able to get full length with his hands, preventing his full ability of getting to the quarterback.

Windsor has a high motor, which may help him carve a role, but he will need to a find a niche. His first step is a quality that redeems a lot of his play but without a full skillset and the limited length prevents a full role.

Undersized interior lineman who lacks explosive quickness and power to compensate for his lack of mass. Windsor doesn’t carry a very broad frame, so he might have issues packing on good weight to withstand the rigors of the NFL game. He has decent initial quickness, is agile and plays with motor.” -Lance Zierlein, NFL Network

If there’s any team that can find a role for Windsor, it’s the Colts. With his high effort and strong production over his time in Penn State, the possibilities of finding a niche role is possible. Although Windsor is limited by his own stature, the potential to carve a niche role out and be a valuable NFL player is certainly possible.