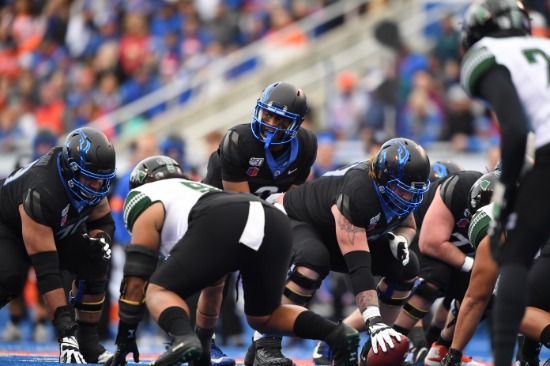 Air Force looks to be capable of winnings its first ever Mountain West championship in 2020. Troy Calhoun is one of only six returning head coaches in the MWC. Donald Hammond may be the best quarterback in the conference. The Falcons will face just one of the opponents it fell to in 2019 — Boise State in Week 2.

These two teams are the premier contenders for the Mountain division in 2020. The Sept. 12 showdown in Colorado Springs may be the deciding factor in the division’s race. Losing at home against Boise State would make it nearly impossible for Air Force to win the division without a collapse by the Broncos.

The Broncos won the MWC in 2019, and appear to be the division’s heavy favorites heading into 2020. Their only two losses in 2019 came in the non-conference (BYU, Washington). In 2020, their schedule features a tough out-of-conference slate again. However, the game that will decide Boise State’s fate this season will be an in-conference road contest at Air Force.

Air Force went 11-2 last season, finishing 7-1 in conference. The only conference loss? A 30-19 defeat at Boise State. Air Force seems poised for another 10-win season this year. The winner of this game will likely win the Mountain division.

Steve Addazio took over the reins in Fort Collins and will look to improve upon a poor, yet promising 4-8 campaign in 2019. The Rams face three Power 5 opponents in 2020: Colorado, Oregon State, and Vanderbilt. All three of those games are winnable, but the Rams will likely be underdogs in each of them. The Rams also have the toughest closing stretch of any MWC team.

Their final five games are against Wyoming, San Diego State, Air Force, Utah State, and finally Boise State to finish the season. In order to secure bowl-eligibility, they will likely need to win a few of these match-ups. That makes their first game of the stretch on Halloween against Wyoming their most important game of their season. Hosting their conference rival may give the Rams the edge they need to pull out a victory and make a bowl game for the first time since 2017.

Thankfully, the Lobos have a very easy non-conference schedule, because new head coach Danny Gonzalez has his work cut out for him. New Mexico has only won two total conference games in the last three seasons. In 2019, it went 0-8 in conference play. This season, the Lobos are clearly far behind every other team in their division.

Their best hope for a conference victory will come in Week 9 at home against San Jose State on Oct. 31. If the Lobos can’t win that game, they will likely, for the second straight season, finish winless in conference play.

The Aggies had a disappointing 2019 behind now NFL quarterback Jordan Love. Not only does losing Love present a challenge, but Utah State also needs to replace six starters on defense. Among those is David Woodward, who had been the defense’s leader for a couple seasons now. Utah State also has a difficult schedule, making bowl-eligibility in 2020 far from a guarantee.

In Week 12, Utah State will travel to Fort Collins to take on division opponent Colorado State. The Nov. 21 contest could be the difference between reaching six wins and staying home for bowl season in 2020.

Wyoming is in a position where it is ready to challenge for the division this season. The Cowboys are looking to improve on 2019’s 8-5 campaign that featured four losses by five points or less. Wyoming’s MWC schedule opens with tough match-ups against San Diego State, Air Force, and Colorado State.

It’s hard to imagine Wyoming going undefeated during that stretch. Because of this, the most important game for Wyoming isn’t their Week 12 match-up at home against Boise State. The week before, on Nov. 14, the Cowboys travel to Reno to take on Nevada. Nevada is in a similar position to Wyoming, and is hoping to compete for its division this season. In order for the game against Boise State in Week 12 to have implications for the division, Wyoming will need to avoid a slip up against a solid Wolf Pack team the week before.