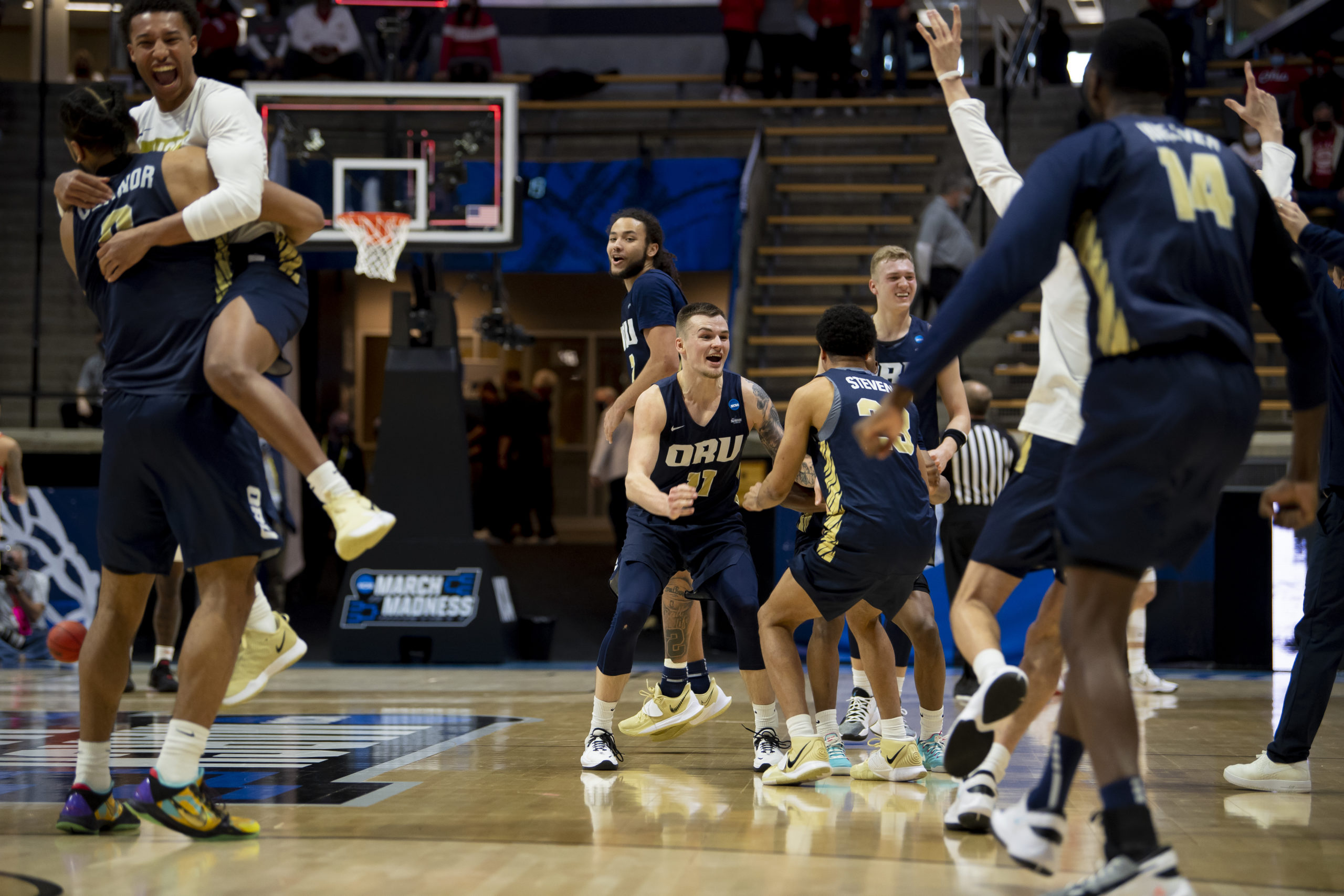 There weren’t many fans at Mackey Arena, but that didn’t matter because magic was still in the air.

With no time remaining in overtime, Ohio State guard Duane Washington Jr. pulled up for a wide-open three-pointer. As the shot rattled off the rim, the limited fans inside the arena knew exactly what had happened and what it meant.

The missed shot gave No. 15 seed Oral Roberts the unthinkable, a narrow three-point victory over No. 2 seed Ohio State in the NCAA Tournament.

It isn’t everyday that a No. 15 seed defeats a No. 2 seed, especially one that came just three points away from the Big Ten Championship just days before like Ohio State. But Oral Roberts played the ‘David’ role perfectly, creating 16 turnovers and making 11 3-pointers to defeat the Buckeyes, 75-72.

“Who walks into a game and says the other person can’t be beaten? I mean, I don’t think anybody does,” Oral Roberts head coach Paul Mills said. “As I shared with the guys, don’t let anybody put a number in front of your name.”

“I mean, you’re telling your guys that you’re going to win, and then you just look them in the eyes to see if they really believe,” Mills said. “We had a group that really believed.”

In overtime, that belief shined through forward Kevin Obanor. In the overtime period, Obanor scored seven points, including five points inside the first minute and a half. With 14 seconds remaining, Obanor’s two made free throws put the Eagles up three points.

Obanor finished the night with a team-high 30 points and 11 rebounds. More important than anything, though, was Obanor hitting all seven of his free-throw attempts.

“When our players get to campus, we ask them to make 20,000 shots, make not take, and they’ve got a six week period to do it. Kevin Obanor did it in six days, making about 3,500 shots. Obviously, going 7-for-7 from the free-throw line down the stretch in this environment kind of speaks to his level of work ethic,” Mills said about Obanor. “And if you’re around guys who have humility and they have a work ethic, that’s usually the two components that translate to being a really good player. So I’m happy he’s a junior. He’s been through it, 7-for-7 down the stretch. I thought he played really well.”

Obanor is the epitome of the underdog mentality that all ‘Cinderella’ teams in this tournament have. He was underrecruited coming out of high school at Mount Zion Christian Academy. He joined the Eagles’ roster in the middle of his freshman season and didn’t make an appearance that season.

During his second season, Obanor led the Eagles in scoring with 14.8 points per game, and was named the Summit League Freshman of the Year during that season. The next season, he averaged 12.3 points and hauled in 6.9 rebounds per game.

“Growing up all my life, I was always like the underdog, The school is, of course, not a big school. And just to prove people wrong, it’s a blessing,” said Obanor.

That story was much of the same for sophomore guard Max Abmas. Abmas, much like Obanor, quickly put his name on the map for the Eagles. As a freshman, he averaged 14.5 points on 41% shooting.

This season, Abames improved on all those numbers, leading the nation in scoring with 24.2 points per game.

For Mills, guys like Abmas and Obanor are the exact players Oral Roberts are looking for.

“You try to recruit guys who want to work,” said Mills. “The reason that somebody goes to school, you go to study accounting to be an accountant. You go to study engineering to be an engineer. Our guys want to be basketball players.”

That same story rains true for every mid-major who makes a deep run in the tournament. Though they may not look at the seedings, those seeds exist for a reason. These underdogs are almost never the most talented team, or the deepest. They usually never stand a chance until the buzzer sounds.

None of that matters, though, because in March, anything can happen.