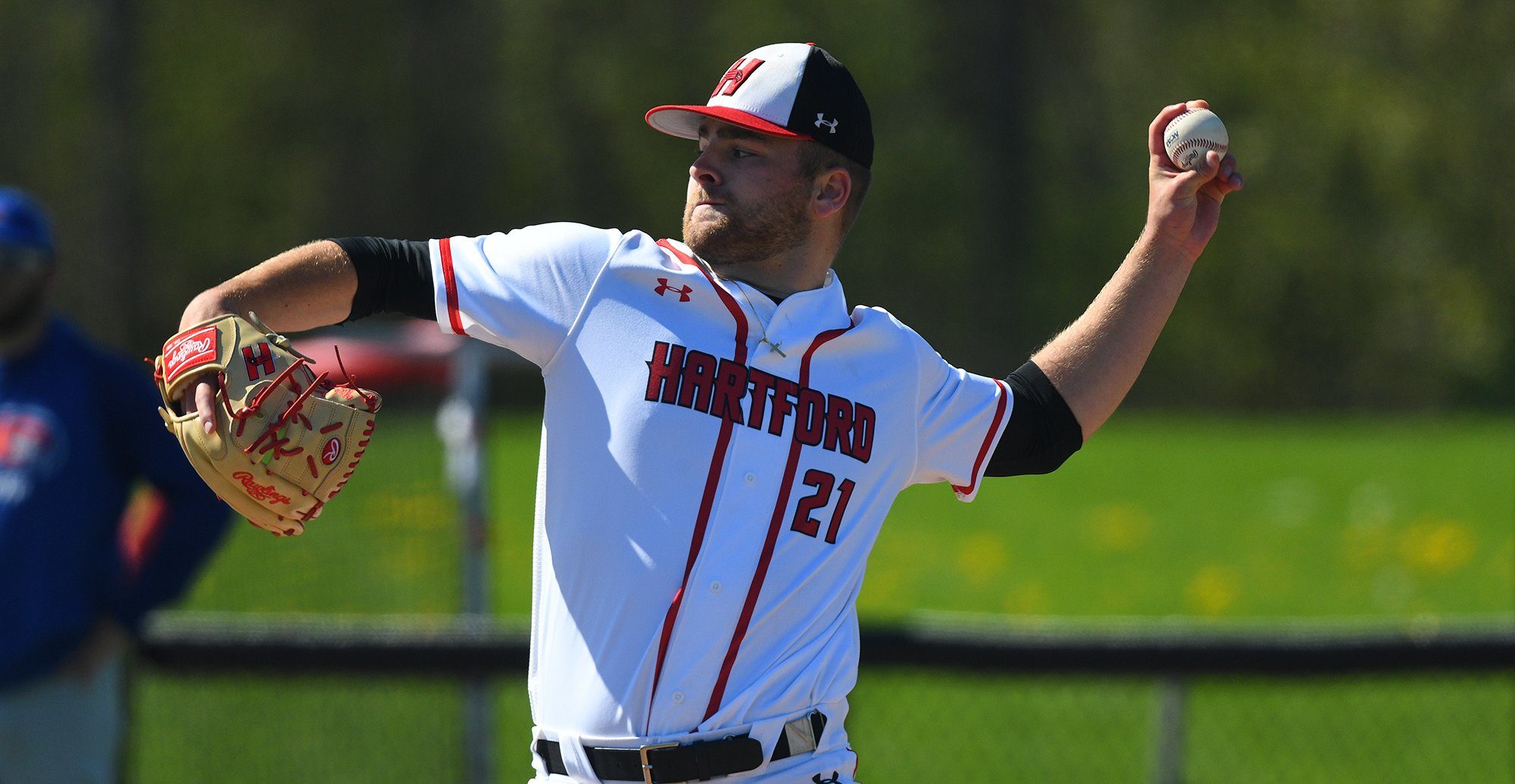 It’s like an intriguing aura has been cast over West Hartford, Conn. It was cast just hours after the University of Hartford announced its intentions to transition from Division I to Division III athletics by the time the 2025-26 academic year rolls around.

It’s almost like fate is saying, “wait a minute?”

In fact, it’s almost like someone out there is purposely giving the middle finger to the university’s board of regents. It’s as if someone is warning them to reconsider their already harshly-criticized decision.

It was just this past Thursday the board voted to make this almost unheard-of move. Since then, the Hawks’ softball team has duct taped the serif font “Hartford” lettering across their chest out of sight as a form of protest in the team’s Friday doubleheader split with Binghamton.

Meanwhile, in just the second game the baseball team suited up following the university’s decision, Hawks’ pitcher Nicholas Dombroski disposed of Albany. He cruised to just the school’s second no-hitter as a Division I program.

If that doesn’t absolutely give you goosebumps, I don’t know what would.

Hartford is also just months removed from its first-ever trip to the NCAA Tournament in men’s basketball. The Hawks were slotted against eventual national champion Baylor in the first round of “The Big Dance.”

What makes it even more disappointing is even though it may have been the school’s first-ever March Madness appearance, they’ve garnered four straight winning seasons. The Hawks have been competitive in the American East conference since joining in 1985. That’s not just in men’s basketball, but across all sports.

Giving Up On History

The women’s basketball team has had some down years recently, but has been to six NCAA Tournaments since joining the league. It has also participated in five WNITs. So they’ve won at this level before.

The baseball team recently qualified for their first NCAA regional back in 2018. Women’s soccer is regularly a league contender, winning four out of five regular-season championships from 2014-18. Men’s golf has the school’s most conference titles with a whopping 12 American East crowns.

It’s not like these teams can’t compete at the current competition level. So that leaves the decision driver pointed in one direction: financial reasons. Unfortunately, that continues to consume the current landscape of collegiate athletics.

This move is purely financial with the specific reasoning likely focused on the impacts on the university as a whole due to the COVID-19 pandemic, and the new set of rules for Name, Image, Likeness (NIL) in the NCAA.

Of course, the move to Division III would let the school off the hook for athletic scholarships. Only Division I and Division II institutions are able to award student-athletes credit financially for their athletic abilities.

It’s still a gut punch that the school’s entire athletics future rests on the shoulders of what is obviously a financial crunch. Unfortunately, it’s the world we live in today regarding intercollegiate athletics.

You don’t think Dombrowski’s no-hitter happened by accident, right? The lefty hurler fanning through nine Albany hitters, and keeping them out of the hit column wasn’t some coincidence.

While there’s still time to fix this travesty before it’s finalized in 2022, this past weekend in Hartford athletics was an act of symbolism for those who called the shots to reconsider their decision. A consistent competitor in the American East in most major sports for more than 30 years, is now all set to be thrown by the wayside.

The university’s board of regents chair David Gordon said that “A move to Division III will allow the University to further strengthen the academic, co-curricular, and wellness experience for all students. While we know this decision will disappoint some members of our community, we remain confident that this shift is in the best long-term interests of the institution and all its students.”

Is this really in the best interest of all the university’s students, though? It’s not hard to understand that this is a decision solely to save money. But what are you costing yourselves in terms of integrity when scaling your athletics programs back a full two levels?

We’ll see how the university’s donors and supporters respond to this. Can they do enough to save these programs’ Division I fates?

Dombroski already expressed how he felt about the situation. He didn’t do it verbally, but in the best way possible. He did it with his performance on the field.