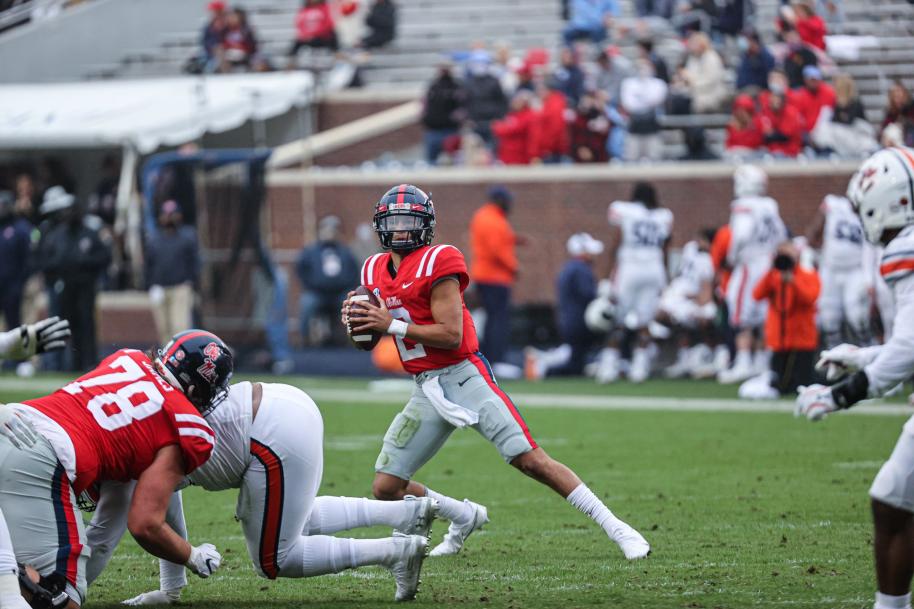 We’ve reached that time of year where analysts rank positions, give Heisman Trophy favorites, and predict where each team will finish.

While there are a lot of lists to sift through, it’s hard not to notice the amount of experts still sleeping on Ole Miss quarterback Matt Corral. No returning quarterback in the entire country had a higher quarterback rating than Corral.

It’s extremely hard to argue against QBR, as it takes into account strength of opponent and discounts “garbage time” yards and points. You simply cannot cheat this statistic.

Elephant in the Room

Let’s get this out of the way right now: Corral had one awful game in 2020, and that was against Arkansas. Regardless of the platform, there isn’t a single post about Corral that hasn’t seen its comment section flooded by Razorback fans.

That game was the crown jewel in a 3-win 2020 season for Arkansas. Despite throwing six interceptions and going into the half down 20-0, the Rebels clawed their way back within five points in the fourth quarter.

As a fan, it was one of those games you couldn’t help but start to laugh at. In addition to the six picks, the Rebels also lost a fumble. You can’t expect to win any game in the SEC West with more than three giveaways.

That will be the main focus for Corral in 2021.

The one thing we see that is consistently ignored when analyzing Corral is the immense amount of pressure he was under each game. Of the 10 games the Rebels played in 2020, they had a lead going into halftime just four times – against Vanderbilt, South Carolina, Mississippi State, and Indiana.

The Ole Miss defense was nonexistent last season. A young quarterback, who knows his defense is not going to get many stops or create turnovers, is much less likely to throw the ball away when pressured. In his games against ranked opponents, Corral averaged 367 passing yards, 2.3 passing touchdowns and just 0.3 interceptions. The eye test and stats confirm one thing: his few struggles in 2020 were due to circumstance — not opponent difficulty.

Since taking over the Lane Kiffin/Jeff Lebby offense, Corral has shown he can make plays in a variety of ways. Corral stays busy in the Rebels’ new offense with designed runs, deep balls and intermediate throws. Even the old school option was called numerous times in 2020.

Although he does not have an updated 40-yard dash time, he showed great speed and agility, especially when taking off to scramble. He extended countless plays with his feet last season. In the regular season finale against LSU, he racked up 158 yards on the ground.

Earlier this offseason, an ESPN analyst said Corral “doesn’t possess the strongest arm.” Let’s ignore the fact that the Elite 11 president said he had one of the strongest arms that has ever come through the program. Let’s ignore the fact that he won the long toss at the Nike Opening with a monster throw of 77 yards. For reference, Andrew Luck and Brett Favre threw 70 and 74 yards, respectively — as professionals.

Anyone with a TV saw the famous “Kiffin clipboard play” last year. Corral casually stepped into a throw to Elijah Moore and launched the ball more than half the length of the field. He did this all season. He may have the strongest arm at the college level right now.

Quarterback is the most difficult position at any level, especially in the SEC. You must know huge playbooks like the back of your hand. You need to read defenses that switch schemes multiple times per game.

There is very little room for error in today’s game. Ole Miss had a brutal schedule in 2020, opening with Florida after a short offseason. COVID-19 presented Kiffin with as much of an uphill climb as any coach could face.

The Rebels added some huge pieces to the defense, and the schedule is much more favorable this time around. Corral’s skill set and veteran presence will be felt by all of college football, starting on Sept. 6 when Ole Miss meets Louisville in Atlanta.