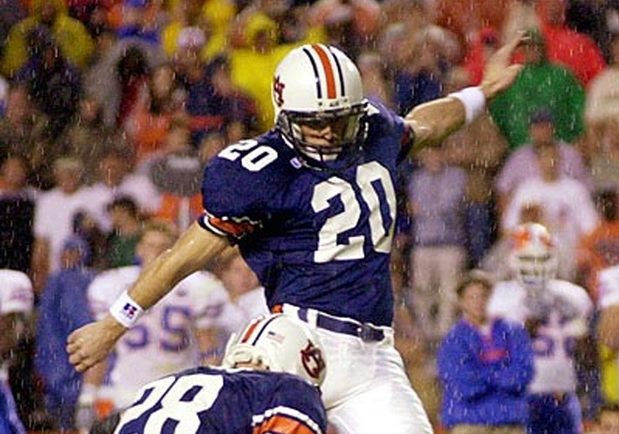 Since 1994, Florida has lost while ranked No. 1 five times. Two of those losses came at the hand of Auburn.

The most recent of those two occasions came on this day 20 years ago. Kicker Damon Duval’s late field goal was the difference as the Tigers topped the Gators, 23-20.

Florida had just ascended to No. 1 as it arrived at Jordan-Hare Stadium on Oct. 13, 2001. At 5-0, the Gators were coming off consecutive wins over ranked Mississippi State and LSU teams by a combined 96-15 margin. Florida had defeated Auburn twice the year prior, including in the SEC Championship.

Despite a 4-1 record, Auburn was unranked. The Tigers’ lone loss had come at Syracuse. Three of their four wins had come by six points or less. Auburn arrived as a nearly 4-touchdown underdog.

Entering the fourth quarter, Auburn trailed 13-10, but went ahead on the first play of the final period. Chris Butler’s 1-yard touchdown run gave the Tigers the lead. They would never trail again.

Auburn was able to extend its lead to seven following Mayo Sowell’s interception of Florida quarterback Rex Grossman on the next play from scrimmage. The Florida defense however, held firm and forced Duval to knock through a 33-yard field goal.

With the Auburn lead now 20-13, the next Florida possession also lasted one play, but had a much different result. With more than 12 minutes to play, Grossman connected with Jabar Gaffney for an 80-yard touchdown to tie the game at 20 apiece.

Three of the next four possessions ended in turnovers, including the ensuing Auburn possession. The Tigers marched inside the Florida 10-yard-line on the ensuing drive, but quarterback Daniel Cobb was stripped of the ball while scrambling and the Gators recovered in the end zone.

After a 3-and-out from Florida, another Auburn fumble — this one by Casinious Moore — looked like the potential death knell for the Tigers. Florida began the drive near midfield, but on the third play, Karlos Dansby was able to pick off Grossman. It was the fourth interception of Grossman by the Auburn defense.

With less than five minutes to play and the ball on its own 24, Auburn meticulously moved down the field. Cobb completed a pair of passes for first downs and Carnell Williams rushed for another. With 17 seconds and the ball on the Florida 27-yard-line, Duval trotted onto the field.

Duval had connected on two prior kicks, including a 45-yarder. With just 11 seconds to go, his 44-yard attempt split the sticks, giving the Tigers the lead and eventual victory.

Florida drew first blood on Jeff Chandler’s 45-yard field goal, but Duval’s 45-yarder knotted the score after one. Auburn took its first lead in the second quarterback when Cobb scored from a yard out.

Chandler’s second field goal came in the final minute of the first half and cut the Auburn lead to 10-6 at the break. Florida’s final lead of the night came on a 20-yard scoring strike from Grossman to Reche Caldwell midway through the third quarter.

Auburn scored the victory despite just 239 yards of offense. Grossman passed for 364 yards in contest, but was picked off four times.

Florida would win its next four games and make its way back to No. 2 in the polls. The Gators ultimately lost a shot at the SEC and national championships with a loss to Tennessee in the regular season finale. Florida would finish third in what would be the final season under Steve Spurrier following a rout of ACC champion Maryland in the Orange Bowl.

Auburn jumped into the top 25 with the win, but dropped four of its final five games to finish 7-5 in its third season under Tommy Tuberville. The upset of Florida came nearly seven years to the day of Auburn handing No. 1 Florida its first SEC home loss under Spurrier. That upset at Jordan-Hare Stadium came on this day two decades ago.