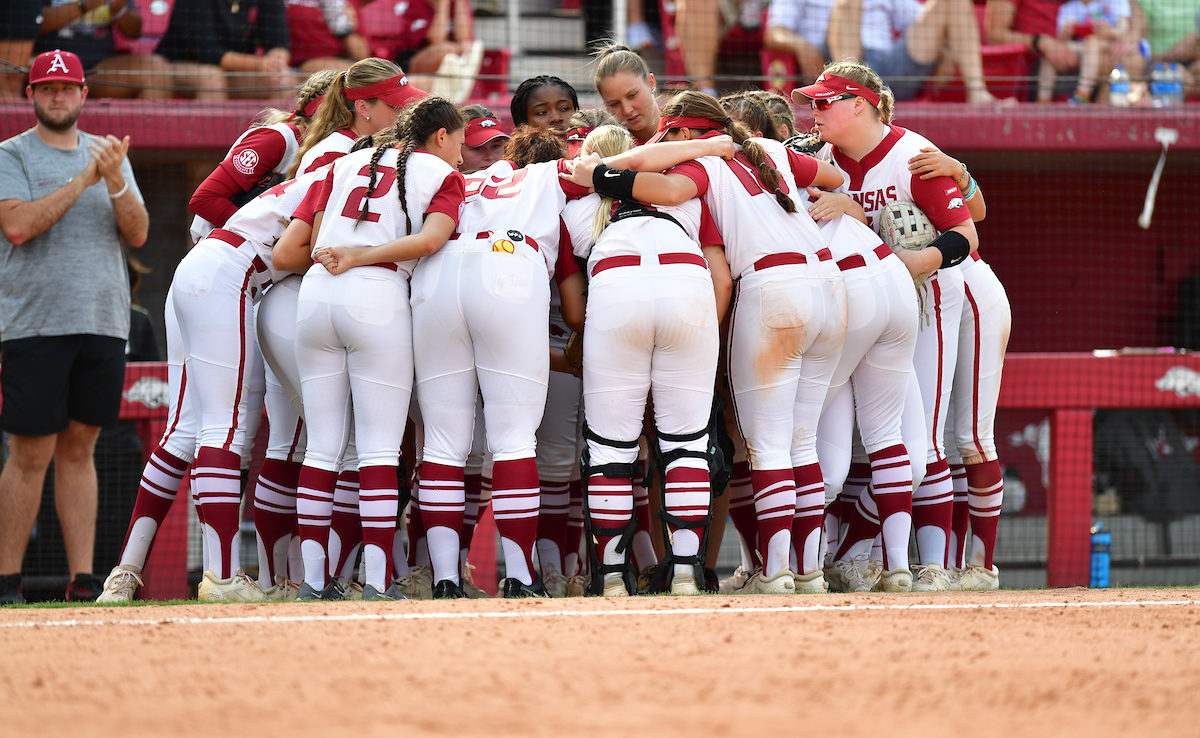 Courtney Deifel and the Arkansas softball coaching staff have received many accolades over the last two years.

Despite that, it seems that Arkansas has little to worry about. Rather than rebuilding, the Razorbacks are reloading.

In November, Arkansas inked the No. 1 signing class in the country, per Extra Inning Softball. That includes two Gatorade Player of the Year winners.

Here’s a look at the incoming class:

Hannah Camenzind, one of two Camenzind’s coming to Fayetteville, is a 5-foot-7, 2-way lefty who can make noise at the plate and in the circle. She is a 2-time state champion from Skutt Catholic High School in Omaha, Neb. She went 16-0 in the circle with a 1.30 ERA during her senior season. Camenzind hit 44 home runs, including a grand slam in the state championship this year. Camenzind tallied 144 RBs throughout her high school career. She earned four all-state honors and an Alliance All-Star selection. Camenzind is ranked No. 12 overall in the Extra Innings 2022 Extra Elite 100.

Lauren Camenzind, the older twin to Hannah, is coming to Fayetteville ranked No. 22 in the Extra Elite 100. She helped lead Skutt Catholic to a perfect 33-0 record and consecutive state titles. Like her sister, she had a home run in the state title game. She tallied 15 home runs, 39 RBIs, 57 runs, and had a .489 batting average during her senior season. Other than being powerful at the plate, she is also phenomenal on defense. She is a 3-time all-state selection. “I’m just really excited to officially become a part of a program and university that is so special and has an amazing fan base,” she said of coming to Arkansas. The Razorbacks are sure to be explosive with these twins.

Rylee Cloud is a hitting machine from Fairview High School in Louisiana. She finished her senior season with a .712 batting average, 40 RBIs, 35 runs, 12 home runs, no strikeouts, and 29 stolen bases. With an average like that, she is sure to make some noise on “The Hill.” She comes in at No. 24 on the Extra Elite 100 list. She was named MVP after Game 1 of the 2022 Louisiana All-Star Game. Cloud also played basketball at her high school. She will be bringing a lot of passion, power, and speed to the team. Cloud said that the greatest award she’s ever received was the Alyssa Claire Young Scholarship at her graduation. Young was a classmate and her best friend. Cloud takes pride in being from a very small town and says that she is excited to see her small community support her and her future team.

Considered one of the best first basemen in the country, Kiki Estrada comes to Fayetteville at 5-9 from Chino Hills, Calif. She committed as a freshman on her very first visit and is in love with the Razorback program. She walked 32 times during her senior season at Orange Lutheran, due to how explosive she is at the plate. Despite the walks, she batted .500, recorded 34 hits, 32 RBIs, and nine home runs. Estrada is ranked No. 13 on the Extra Elite 100 list. The Los Angeles Times named her Player of the Year, along with Trinity League first-team honors. Estrada is a 2-time MVP, and Team Mexico honoree. Her brother Brad plays hockey for the Razorbacks.

Nyjah Fontenot is a triple threat player from Lake Charles, La. and is the No. 25 player in the Extra Elite 100. She had a .422 batting average during her senior year at Barbe High School, adding 28 RBIs and 38 runs. Tallying 21 stolen bases, her speed also won her first place in a district track meet, hours before winning a playoff softball game. Fontenot can destroy defenses with blazing speed. She has earned three years’ worth of all-state and all-district awards and MaxPreps first-team All-American honors. Fontenot also won the 2021 state championship at Barbe. She is a 3-time national champion as well.

Robyn Herron packs a punch in the circle, standing 5-10 with a high school ERA of 1.39 and 501 strikeouts. In 2021, her high school ERA was an unbelievable 0.35 with 170 strikeouts in 79.1 innings. She went on that summer to throw a 0.87 ERA for the Wichita Mustangs. She sits at No. 14 in the Extra Elite 100 rankings. Her senior year, her ERA was 1.10, recording 195 strikeouts and giving up 41 runs. Herron earned Western Conference first-team honors and FACA District 15 6A Player of the Year. Herron said that she “couldn’t be more grateful to the coaching staff for believing in me,” but the Razorbacks are lucky to have her.

Reagan Johnson brings incredible speed and defense to Arkansas. She comes in at No. 9 on the Extra Elite 100 list. Reagan had a .830 batting average, 48 RBIs, and 47 runs scored during her senior season at Falls City High School in Texas. She also managed a perfect fielding percentage. Johnson stole 155 bases in her high school career and was never once caught. In 2021, she earned District Defensive MVP. Outside of softball, she is the 2A UIL State record holder in girls 300-meter hurdles and holds two silver medals and a gold medal.

Atalyia Rijo is a middle infielder, big hitter, and 5-year starter at Corning-Painted Post High School in Horseheads, N.Y. She ended her senior season with a .585 batting average, 1.860 OPS, seven home runs, five triples, 21 RBIs, and 43 runs scored. Her play earned her 2021-2022 New York Gatorade Player of the Year and MaxPreps Best Player in New York. Rijo is also a state champion. She has a fantastic arm, quick hands, and is ranked top 10 by Extra Inning Softball and Flo Softball. Rijo was invited to play for the Dominican Republic national team. Rijo, Estrada, Fontenot, and Johnson are all part of the Lady Dukes Lamar 18U American Athletic Union team.