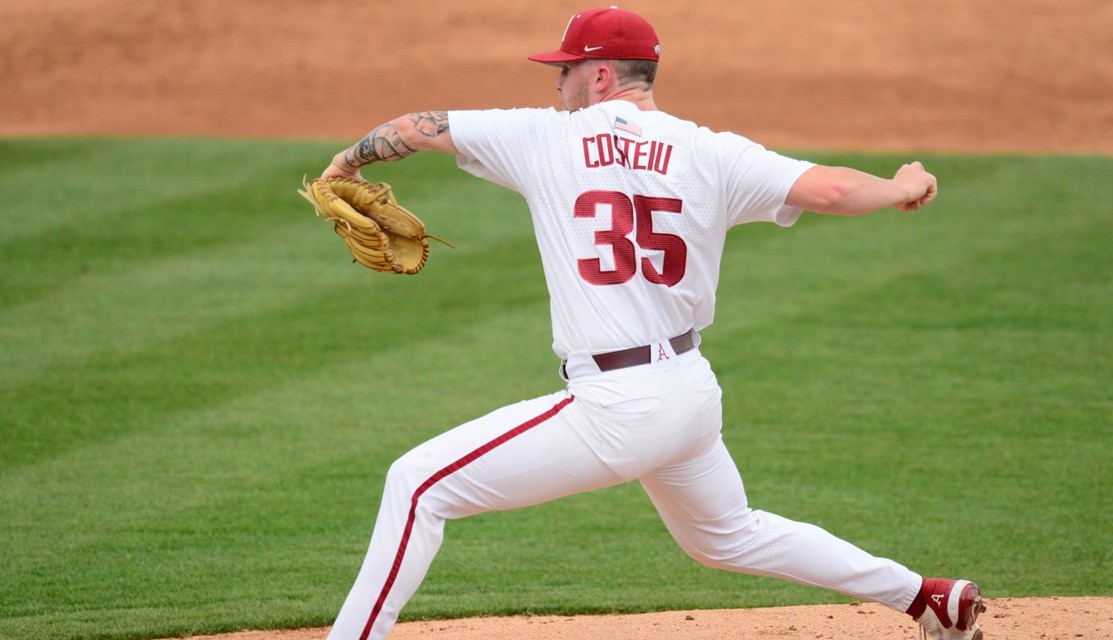 There are more than four former Arkansas baseball players having success in the minor leagues, so that calls for another round. The next group of players reviewed are also all pitchers.

A wider range in age and experience will be explored. The unknown still remains with a lot of former players not currently in the majors.

With a majority of their stats at hand, let’s continue on by checking in on four former Razorbacks pitchers.

The opening day starter in 2021 for the Hogs, Wicklander is fresh into the minors. Drafted in the eighth round by the Tampa Bay Rays, he finds himself in Single-A ball. He found his way out of the Rookie League rather quickly.

The positive thing regarding his jump is how his stats have remained consistent. That’s the mold that he always exuberated in Fayetteville. Beginning with his career stats, he has pitched in 12 total games and 38.2 innings. Wicklander holds a 5-2 record and 2.09 ERA.

His average number of walks and hits per inning (WHIP) holds below one at 0.96. Most of his 67 strikeouts have come this season.

Wicklander has pitched a total of 27.1 innings through seven games for the Charleston River Dogs this season. His ERA only takes a slight bump, landing at 2.96. A rising ERA can be contributed to his hits per nine innings rising nearly a full hit from 2021.

There doesn’t seem to be an opportunity for Wicklander to move to Double-A quickly. As long as he continues to show promise and that he can last more than four innings per game, he will get his eventual shot.

The former relief pitcher for the Razorbacks finds himself in a quality situation for the Los Angeles Angels’ organization. Drafted last year alongside Wicklander, he was picked up in the seventh round. Since, he has made his way up to High-A ball at only 21 years of age.

On his way up the minors, his stats have seen steady improvements in some areas and declines in others. The positive is that they are impressive, no matter how you cut it.

Thus far in his young career, Costeiu has appeared in 18 games and pitched a total of 40.1 innings. The majority of those appearances came outside of his current league. He’s 2-1 with a 2.23 ERA.

He holds 57 strikeouts and averages 12.72 per nine innings. His WHIP also falls a tick under one, which is never an easy feat. Walks tend to be more of an issue for Costeiu than Wicklander, as his career walks per nine average is 3.12.

While it is not a high number, one would want to limit the hits in that scenario. By allowing just 5.80 hits per nine innings, he has certainly done so.

The first thing that jumps off the page for his 2022 stats is his WHIP. Sitting at 0.99 for his career, it falls to 0.84 on the season. Along with an outstanding WHIP comes a low ERA, which is currently 1.19. The stats reflect seven games and 22.2 total innings pitched.

With his numbers, it is baffling that a loss appears in his stat sheet. Costeiu is 1-1 for the season. Moving up to High-A has caused his strikeouts per nine innings to drop harshly from 15.79 in 2021 to 10.32 this season.

More good news is that the number of hits allowed per nine innings have also dropped. Falling from 7.64 in 2021 to 4.37 is undeniably impressive. The stats point to Costeiu being a pitcher that gets a lot of outs when the ball is in play. It would not be a surprise to see Costeiu get a shot in Double-A by the end of the season.

A name that brings a smile to Arkansas fans’ faces is certainly Blaine Knight. One of the players that helped lead the squad to Omaha, he found his way into the pros. Drafted by the Baltimore Orioles in 2018, he has worked his way up to Triple-A.

To get this out of the way, things have been lackluster for Knight at that level. Still, working his way up to the highest minor-league level in four years is no small task.

Thus far in his career, he has appeared in 56 total games and pitched a full 231 innings. His biggest blemish is his .250 winning percentage that comes from a 7-21 record. Knight’s 2022 ERA balloons his career number as it sits at 5.30 for the year. He has 185 strikeouts for his career and averages 7.21 per nine innings.

Another number being hurt by his 2022 season is his WHIP, which sits at 1.46. That number is slightly above the league average.

There is no other way around it — his 2022 season has been for the birds, literally. Through seven total games and 23.2 innings, Knight is 0-2 with an 8.37 ERA. Allowing more than 17 hits per nine innings is not what any skipper would want to see.

The Orioles organization seems to be keeping the faith that he might bounce back from a rocky start to 2022. If he doesn’t, he might be looking down the barrel of a return to Double-A before long.

For some Razorback fans, it might seem rather odd that Evan Lee has transformed into a full-time pitcher. Moving from being a two-way player has allowed him to move up to Double-A in the Washington Nationals’ organization. As of early May, Lee was listed as a part of their 40-man roster.

This is proof of his increasing value. Adjusting as he moves up the ranks has not come with many complications. That is a big reason why Lee’s name is getting the attention right now.

He has appeared in 41 games and 137.2 innings for his career and has compiled a .500 record at 7-7. He holds a 3.66 ERA and a sizable 180 total strikeouts as his strikeout numbers increase. His walks per nine innings have increased as well, sitting at 5.40 as he continues to try to find the strike zone consistently. A 1.33 WHIP is respectable, especially considering that he’s had to adjust to being a full-time pitcher as a professional.

Being a part of the Nationals’ 40-man roster shows a lot of promise for Lee. His velocity might be the only concern as it relates to his control. He is still adjusting, of course, but has the stuff to make it to Triple-A very soon.