Razorbacks in the MiLB: Early-Season Check-in 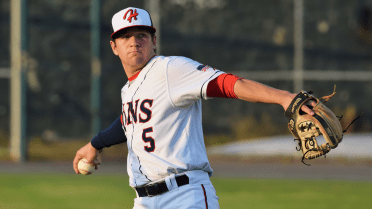 It would not be a lie to say that Arkansas has produced Major League Baseball-level talent.

Guys such as Andrew Benintendi and Dallas Keuchel have already proven such. The ability to move between talent levels is the beauty of professional baseball.

Leagues beneath MLB are where the majority of players reside. The downside to that equation is the lack of coverage among sources outside those that are affiliated.

Many questions are asked daily via social media about where (insert player) is/has been playing. MLB stats are readily available, though many are left in the dark on the progress of other former Razorbacks in the minors.

There are many former players playing in the minor leagues currently. The following are four former pitchers and their progress report for their career and 2022 season:

Kopps is currently on the Double-A San Antonio Missions as a member of the San Diego Padres’ organization. With his career just beginning, he was given lots of opportunities early on. Thus far, he has 25 game appearances with a 2-1 record.

Although he has shown up in 25 games, he has only pitched 26 total innings. He carries a career 2.77 ERA while holding 35 strikeouts and a stellar 0.96 WHIP. For those unfamiliar with stat names, WHIP is the number of walks and hits given up per inning. That number is contrasted by 12.12 strikeouts per nine innings.

Moving up from Single-A baseball has caused his numbers to inflate a bit. For the current season, Kopps has a 5.56 ERA after 11 games and 11.1 innings. He totals 13 strikeouts and a 1.24 WHIP.

His higher ERA has led him to a 1-1 record in 2022. It’s safe to say that he has not been as impressive as many hoped. He still has plenty of time in his career, however. Fueled by beet juice, Kopps will be looking to hold his own in Double-A.

The first thing that comes to mind with this name is injuries. Fighting the injury bug thus far in his professional career has not been ideal. Everyone would agree that Isaiah Campbell has made the most of his opportunities, though.

A member of the Seattle Mariners organization, he is currently in High-A ball. He has only played in nine games for his career, but they have all been noteworthy. As a starting pitcher, Campbell has a 4-1 record.

With 37.1 innings pitched, he holds a 1.93 ERA. Adding 35 total strikeouts and a 1.02 WHIP with a contrasting 8.44 strikeouts per nine innings has allowed the organization to retain the faith.

Thus far in 2022, he has pitched in just four games. While having improved numbers thus far, he is listed on the 7-day injured list currently. With a 1-0 mark, he can claim a perfect record through 18 innings pitched.

He has an ERA of 1.50 coupled with 15 strikeouts and 1.06 WHIP. Assuming he can finally stay healthy once he returns, Double-A ball could give him a call. With the Arkansas Travelers being the said affiliate, expect a warm welcome if and when it comes to be.

A player who spent one year in Fayetteville, Lael Lockhart has been nothing short of solid. He is assigned to the High-A affiliate of the Los Angeles Dodgers currently. Throughout his young career, Lockhart has appeared in 16 games and thrown 35.2 innings.

He holds an ERA of 2.27 with a 3-1 record. Lockhart also has a heaping number of total strikeouts at 55. Those strikeouts are accompanied by a 1.35 WHIP.

His career number stands at a solid 13.88 strikeouts per nine innings. Used as both a starting and relief pitcher in 2022, his stats have mostly improved. Through six games and 22 innings, Lockhart has earned only one win.

Despite that, he has a 1.23 ERA and 30 strikeouts. His WHIP is slightly lower than his career number, which sits at 1.32. Lockhart’s strikeout numbers average down to 1.36 per inning.

Lockhart seems to quietly be catching fire in 2022. Although mostly in whispers, his name is being tossed around the organization. The Tulsa Drillers are regularly a winning Double-A team and Lockhart could be there before long.

Currently 24 years old, Cronin’s early career has been phenomenal. The Double-A affiliate of the Washington Nationals has found itself a star. Through 50 appearances, he has been throwing the baseball out of its skin. With a 5-1 record in 64.1 innings pitched, his stats don’t lie as he holds a 1.68 ERA and 108 strikeouts.

While his number of strikeouts have dropped since his debut 2019 season, it still holds at 15.11 per nine innings. That number is the best among the players previously mentioned by about a strikeout and a half. His career WHIP of 1.07 is bolstered from this season’s 0.97 number.

Having a number of combined walks and hits per inning less than one is difficult to achieve. The average number in the MLB stands between 1.30 and 1.45 for comparison’s sake.

Both the Triple-A and Double-A affiliates of the Nationals are average in the pitching department overall. Both fall in the middle of their respective leagues in earned runs and ERA. With a known need for upgraded pitching, who knows when Cronin may get the call to move up? For the Triple-A squad, he could be a fun addition.