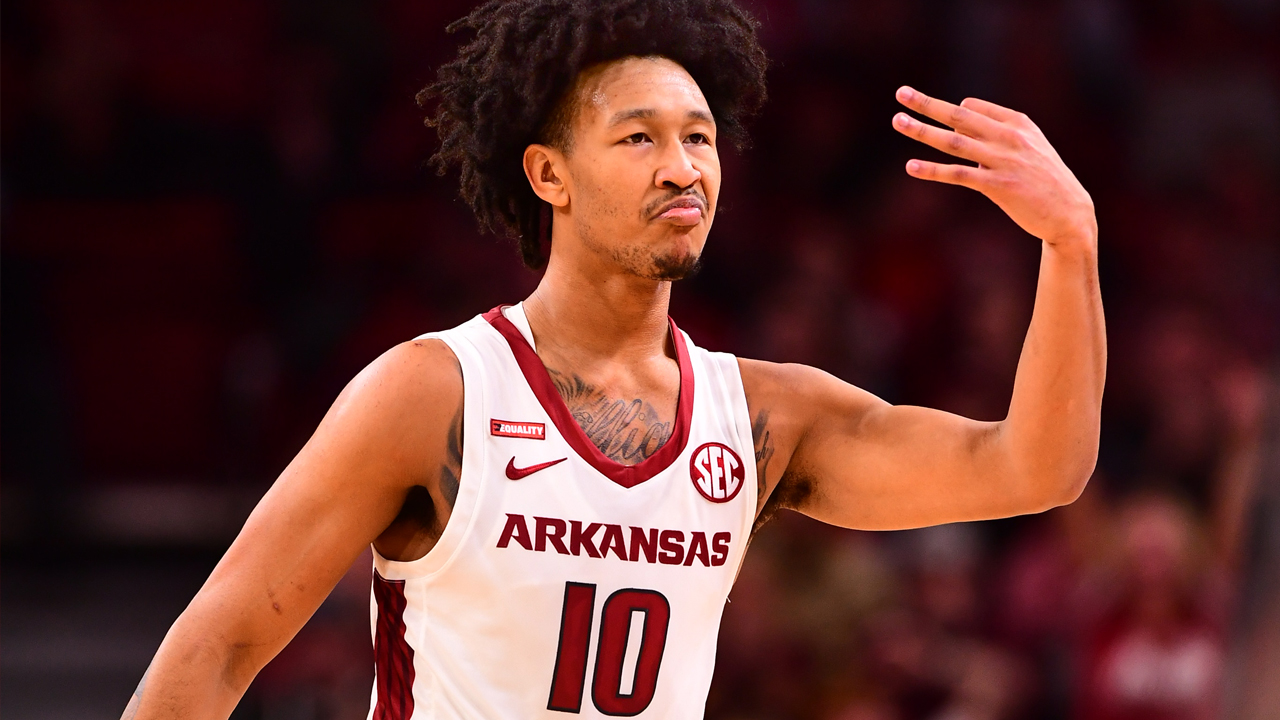 With the recent success that coach Eric Musselman’s team has had, it would be a safe bet that Jaylin Williams has been the primary reason for Arkansas’ turnaround.

J.D Notae is the SEC’s leading scorer, but Williams’ emergence has coincided with the recent success. Since a 44-point win over Missouri earlier this month, the Razorbacks have been a different team.

Williams, who stands at 6-foot-10 and 240 pounds, came to Arkansas as a part of the talented 2020 in-state crop. The class included the likes of guards Devonte Davis, K.K Robinson, and future lottery pick, Moses Moody.

Early on in his Arkansas career, Williams was able to capitalize on the lack of depth in the frontcourt to get minutes. Musselman is a big–time user of a small-ball lineup, but it never seemed to bother Williams.

On the road to an Elite Eight appearance for the Razorbacks last season, Williams averaged just over 15 minutes per game in 26 appearances. This allowed him to rack up 3.7 points, 4.7 rebounds, 0.8 assists, and 0.7 blocks per game. The very first game of his tenure was a 10-rebound effort off the bench against a lowly Mississippi Valley State squad.

He would have three other games last season where he reached the 10-rebound mark. In doing so, it created a façade that his best skill was rebounding. That however, was not the case.

While only making an appearance on the stat sheet mildly, his passing vision quickly caught the attention of coaches and fans alike. The fact that he is a big man made it even more fascinating. His presence however, was felt beyond what could be seen on the stat sheet.

Williams was never scared to give up his body. In fact, he led the team in charges taken with 16 last season.

Williams’ willingness to give himself up and aggressiveness on the defensive end of the floor however, was not usually seen on the offensive end. This season, that has all changed.

Whether it was Williams’ decision to not be aggressive offensively or Musselman’s, we will never know. With the high level of aggressiveness that guys like Justin Smith and Moody showed, maybe it just wasn’t time for Williams to lace up the sneakers for attack mode. Entering the offseason, there was plenty of speculation that Arkansas would pursue a big man via the transfer portal.

When Musselman only brought in two transfer guards and three transfer forwards, the speculation faded. The only big men on the roster were junior Connor Vanover and of course, Williams. Both of whom were unproven for the majority of the 2020-21 season.

It may have not seemed like it at the time, but Musselman and the staff were putting all their chips on the table and rolling with what they had in Williams. What happened behind the closed doors of the practice facilities must have been enough to give the coaches solid faith to not pursue a player at the same position. It may have taken a little bit of time to adjust to a newer role, but the gamble paid off.

Through 20 games this season, Williams has practically doubled his minutes per game, going from 15 to 29.7. Some might argue the lack of production from other players at the position is a big part of it, but that disrespects both parties. It is obvious how much he has improved this season to earn those minutes.

“I think his progression has been phenomenal,” Musselman said after the win.

The only statistical declines for Williams this season have been turnovers per game and free throw percentage. The turnover numbers can be attributed to more minutes. Every other category has stayed roughly similar or greatly improved from his previous season.

Starting SEC play with three straight losses was not something that Arkansas wanted nor expected. The shocking turnaround, which includes a five–game winning streak, can be contributed to Williams and his newfound confidence on both ends of the floor.

During the stretch, Williams had taken his game to a new level. During the winning streak, he’s averaging 15 points, 10.2 rebounds, 2.4 assists, 2.8 steals, and 1.4 blocks per game.

His shooting percentages over the last five games have also been exceptional. He has shot 51.1% from the field, 44.4% from deep, and boosted his free throw percentage up to 89.3%. With three double-doubles in the last five games and one rebound short of a fourth, he has become one of the more recognized big men in the SEC.

Unsurprisingly, Williams’ impact during the winning streak has gone beyond the box score. His confidence level has been night and day when compared to the start of the season. Early on, Williams seemed hesitant to take open shots. Now, Williams has been releasing the three-ball seemingly without a hitch.

During Wednesday’s contest against Ole Miss, Williams knocked down his first trey since his Arkansas debut. Musselman wasn’t afraid to mention it following the game.

That confidence from the outside could certainly be coming from his performance in the paint recently. As games have passed, he has gotten more comfortable in his ability to attack the basket and finish at the rim with consistency.

The same can be said for his presence on the defensive end. Williams blocked three shots in each of the last two games against Ole Miss and Texas A&M. His ability and willingness to take charges has yet to cease, either. That is unfortunate for opposing teams.

Combining every aspect of Williams’ game with his infectious personality and his willingness to work is something that can’t be beat.

“I think his teammates want him to succeed… he’s extremely confident,” said assistant coach Gus Argenal. “This is the most confident I’ve seen him. For us, that’s a great thing.”

Being able to have the full trust and confidence from your coaches is one thing. Getting it from both your coaches and teammates is great for the mental aspect of the game, which has surely played a positive role in Williams’ recent success.

Williams was recently rewarded for his gritty performances against South Carolina and Texas A&M, earning SEC Co-Player of the Week. He was also designated the MVP of the team’s previous four games.

Williams and the Razorbacks are getting set to be a part of the annual Big 12-SEC Challenge. They will host West Virginia with the hopes of continuing a dominant stretch. The consistent play of Williams will be massive for the Razorbacks as the regular season’s end edges closer.