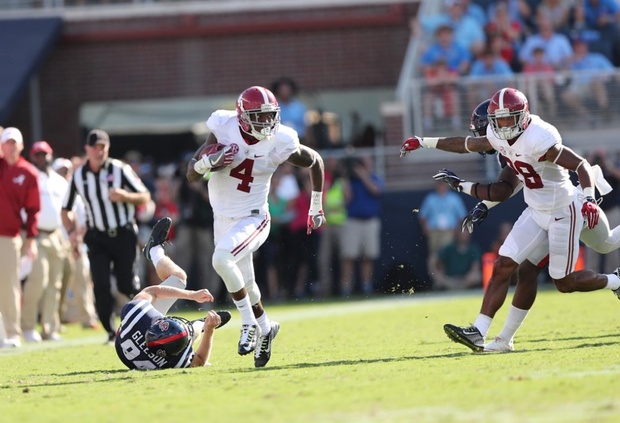 For Ole Miss, the 2016 season was hardly one to remember. The Rebels went just 5-7, but came close to beating some of college football’s best teams.

On this day five years ago, Alabama used three non-offensive touchdowns to rally past Ole Miss. The Crimson Tide erased a 21-point deficit before holding on for a 48-43 victory.

Alabama had arrived in Oxford on Sept. 17, 2016 with a record of 2-0 and ranked No. 1 in the country. The Crimson Tide had little trouble in either of their first two games as they blasted USC in Dallas before handling Western Kentucky.

Under head coach Hugh Freeze, Ole Miss had been a thorn in Alabama’s side. The Rebels served as the only loss for the Crimson Tide in each of the previous two regular seasons.

Ole Miss was ranked No. 19 and 1-1 overall. Most fans in Oxford however, probably thought the Rebels should have been undefeated. In the season opener, Ole Miss let a 28-6 lead slip away in a loss to Florida State. Unfortunately for the Rebels, history repeated itself 12 days later at Vaught-Hemmingway Stadium.

The Tide Get Rolling and Never Stop

Starting strong again was no issue for Ole Miss as the Rebels raced to a 24-3 lead.

Running back Akeem Judd got the scoring started with a 23-yard touchdown before quarterback Chad Kelly found tight end Evan Engram for a 63-yard touchdown. With less than three minutes remaining in the first half, John Youngblood returned a fumble from Alabama quarterback Jalen Hurts 44 yards for a touchdown.

Unfortunately for Ole Miss, 45 of the next 51 points would belong to the Crimson Tide. Before the first half was over, Alabama had clawed to within a touchdown.

Three plays after the fumble return for the Rebels, Calvin Ridley scored from six yards out for Alabama’s first touchdown. After a defensive stop, Eddie Jackson returned an Ole Miss punt 85 yards for a touchdown to make it 24-17 at the break.

The second half was just more than three minutes old when defensive lineman Da’Ron Payne scored the game’s third and Alabama’s second non-offensive touchdown. Following a sack and fumble by Kelly, Payne scooped it up and went three yards for the tying touchdown.

Alabama took its first lead of the game about six minutes later when Adam Griffith connected on a 30-yard field goal. After Ole Miss’ Gary Wunderlich answered with a short field of his own, Alabama went ahead for good in the final seconds of the third quarter on a 1-yard touchdown run by Bo Scarbrough.

It took less than two minutes for Ole Miss to respond with a Wunderlich field goal to cut the lead to 34-30. Following an exchange of punts, Damien Harris scored from a yard out midway through the fourth quarter to push the Alabama lead to 11.

Jonathan Allen looked to have put the exclamation point on the Alabama win as he returned another Kelly fumble 75 yards for a touchdown to make it 48-30 with 5:28 remaining, but Ole Miss refused to go quietly.

With less than three minutes to go, Ole Miss scored its first touchdown in nearly 30 minutes as Kelly found Damore’ea Stringfellow for a 5-yard touchdown. Eight seconds later, the Rebels were in the end zone again following a successful onside kick and 37-yard touchdown pass from Kelly to A.J. Brown.

The 2-point conversion try was no good, but with 2:51 remaining and three timeouts remaining, Ole Miss elected to kick deep. It would never see the ball again as Harris converted a critical third down to put the contest away.

Kelly passed for 421 yards and three touchdowns for Ole Miss, but the two fumble returns for touchdowns proved too costly. Engram led all receivers with nine catches for 138 yards.

The Rebels finished with 522 yards to 492 yards for Alabama, but the Crimson Tide possessed the ball for more than 35 minutes, ran for 334 yards and averaged seven yards per carry. Hurts (146 yards rushing) and Harris (144 yards) combined for 290 yards on the ground.

Ole Miss fell to 1-2, but wouldn’t fall out of the polls until after an Oct. 22 loss to Auburn. The Rebels lost five of their final seven games to finish 5-7 and miss a bowl game for the first time in five years.

Alabama would run the table in the regular season without playing a game closer than 10 points the rest of the way. The Crimson Tide beat Florida in the SEC Championship and Washington in the Peach Bowl before falling to Clemson for the national championship.

Since dropping back-to-back games to Ole Miss in 2014 and 2015, Alabama has won five straight in the series. That started with a 21-point comeback that took place on this day five years ago.