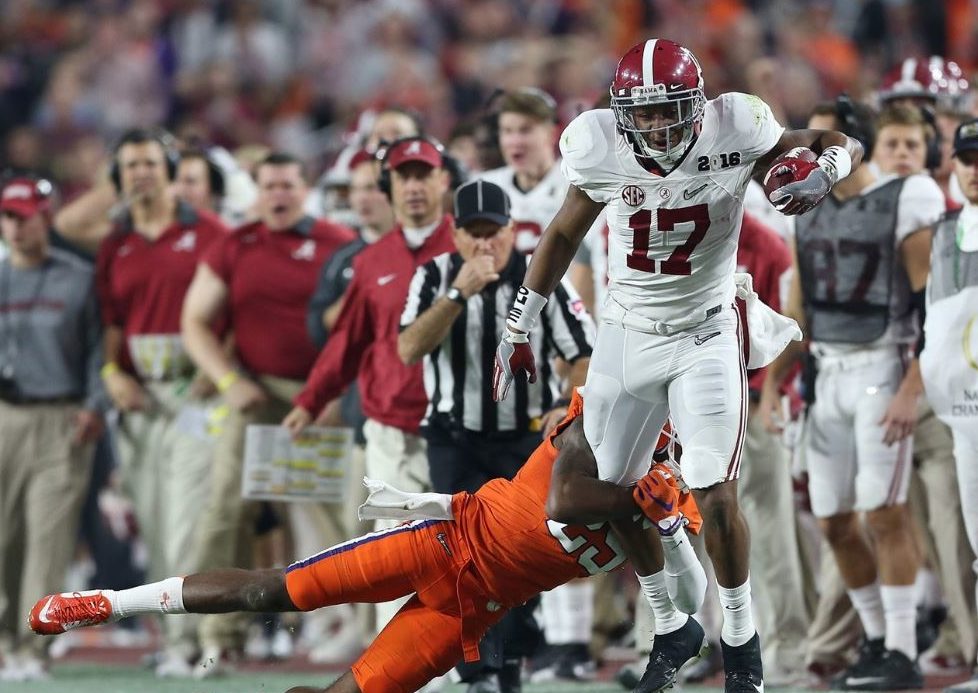 Alabama will vie for its sixth national championship under head coach Nick Saban on Monday night.

Historically, Saban has been known as a great defensive mind. His fourth national championship however, was a shootout.

On this day five years, special teams played a major role. It was a pair of plays in the kicking game that ultimately led the Crimson Tide past Clemson in a National Championship thriller, 45-40.

No. 1 Clemson was 14-0 and had already sets a school record for wins as it arrived in Glendale, Ariz. on Jan. 11, 2016. The Tigers had their close calls throughout the course of the 2015 season, but were coming off an impressive 37-17 win over Oklahoma in the Orange Bowl.

Since dropping its SEC opener, second-ranked Alabama had won 11 straight games. The Crimson Tide were coming off a 38-0 win over Big Ten champion Michigan State in the Cotton Bowl. In Arizona however, they got all they wanted from the Tigers.

Alabama was on the short end of a 24-21 score at the end of three quarters, but drew even less than five minutes into the final period. Adam Griffith’s 33-yard field goal tied the game, but his next kick may have been even more important.

Griffith fooled the Tigers on the ensuing kickoff with a surprise onside. The Crimson Tide recovered at midfield.

It took just two plays for Alabama to go ahead for good. Quarterback Jake Coker’s 51-yard touchdown pass to tight end O.J. Howard put Alabama back in front for the first time since the 5-minute mark in the third quarter.

The ensuing Clemson drive made its way to inside the Alabama 15-yard-line, but on third down, quarterback Deshaun Watson misfired. Greg Huegel’s 31-yard field goal midway through the period cut the lead to 31-27.

Huegel’s ensuing kickoff was fielded at the 5-yard-line by Kenyan Drake. Drake made his way left before evading a tackle and hitting the sideline. After getting by Huegel, Drake had just one Clemson player to beat. He did so by diving into the end zone for a 95-yard touchdown to give the Crimson Tide their biggest lead of the night, 38-27.

Too Little, Too Late

Clemson scored on each of its next two drives, but each time, Alabama had an answer. After Watson’s 15-yard touchdown pass to Artavis Scott cut the lead to five with less than five minutes remaining, Alabama went 75 yards in eight plays to essentially cement the contest.

The Crimson Tide reached the red zone on a 63-yard strike from Coker to Howard. Three plays later, a nifty scramble by Coker set Alabama up with goal-to-go. On third down from the 1-yard-line, Heisman Trophy winner Derrick Henry put the exclamation point on the victory with his third rushing touchdown of the night with 1:07 remaining.

Watson’s fourth touchdown pass of the night — a 24-yard scoring strike to tight end Jordan Leggett — cut the lead to 45-40 and gave the Tigers a glimmer of hope with 12 seconds to go. The onside kick attempt however, was recovered by Alabama. The Crimson Tide had claimed their 16th national championship.

The first half saw four touchdowns from two players. Touchdown runs by Henry of 50 yards and one yard bookended a pair of touchdown passes from Watson to Hunter Renfrow. At halftime, the teams went to the locker room tied, 14-14.

Coker’s 53-yard touchdown pass to Howard more than two minutes into the second half put Alabama back in front, 21-14. After a Huegel field goal cut the lead to four, Clemson regained the lead on Wayne Gallman’s 1-yard touchdown run with 4:48 to play in the third quarter.

Clemson put up 550 yards of offense, but it was not enough. Watson passed for 405 yards to go with a team-high 73 yards rushing in the defeat.

For Alabama, Coker finished with 335 yards passing. Howard led all receivers with 208 yards on five catches. Henry was the game’s top rusher with 158 yards on 36 carries. Alabama’s Eddie Jackson intercepted Watson for the game’s only turnover.

Although Clemson was unable to win its first national championship in 34 years, the Tigers’ wait for a title would be just one more year. In a rematch the following season, Clemson scored with a second left to beat the Crimson Tide, 35-31.

For Alabama, the national title would be its fourth in seven years. Things could change on Monday night, but the Crimson Tide’s victory over Clemson remains the highest scoring national championship game since the inception of the BCS in 1998, which evolved into the College Football Playoff in 2014. It happened on this day five years ago.