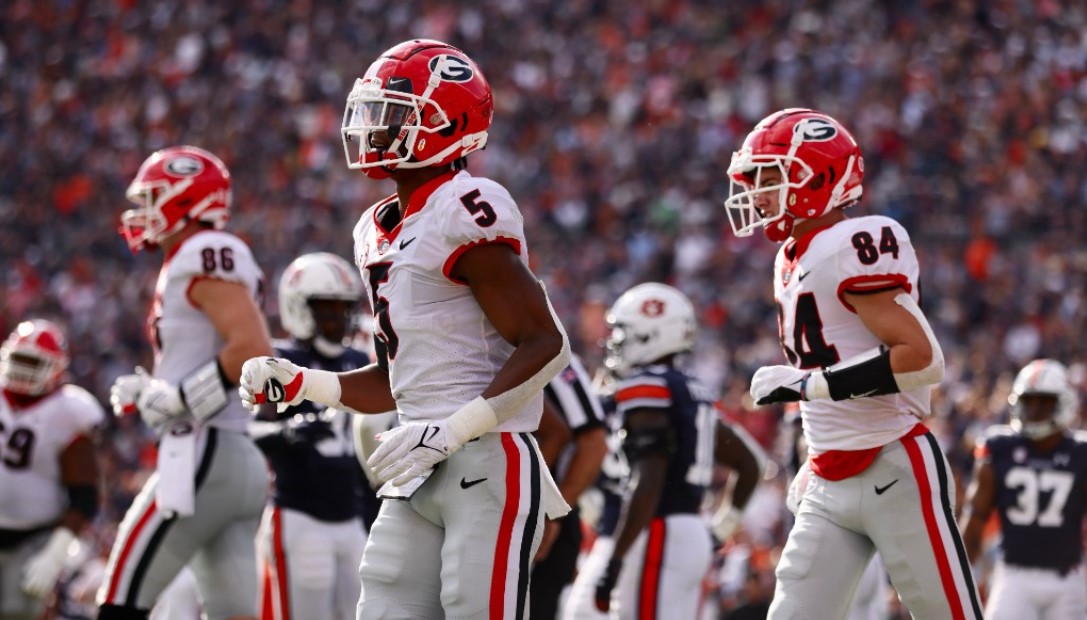 The previous No. 1 came from the SEC. So does the new one.

Here is how everything shakes out in our weekly SEC power rankings after a wild week across the country:

Georgia and Alabama have been neck-and-neck for some time now. After Alabama fell to Texas A&M and the Bulldogs handled Auburn 34-10 on the road, there was no doubt.

Despite being shorthanded, Georgia continues to roll through all of its opponents and looks to be the best team in the nation.

There is a very good chance that Georgia finishes the regular season unbeaten.

The Crimson Tide fall from the top spot after losing their first game since the 2019 Iron Bowl.

The Tide came from behind late and briefly led, but Texas A&M knocked through a field goal as time expired to pull off the 41-38 upset in College Station.

It was a rough loss for head coach Nick Saban and Alabama, but it does not happen often. The Tide should bounce back, but they are clearly a very beatable team.

Ole Miss and Arkansas gave us an instant classic in Oxford, and it literally came down to the final play.

The Rebels knocked off the Razorbacks 52-51 after a failed 2-point conversion on the final snap of the game.

The Wildcats are one of the two remaining unbeaten teams in the SEC at the midway point of the season.

Kentucky will have a date against Georgia this week in a game that will have massive implications in the SEC East.

The Razorbacks came just one play short of victory at Ole Miss.

Arkansas will get Auburn in Fayetteville this weekend.

The Aggies plummeted to the No. 10 spot last week after losing to Mississippi State.

Texas A&M has looked pedestrian at best this year. That was until it knocked off the top-ranked Crimson Tide this past weekend in College Station.

With two SEC losses, A&M does not control its own destiny. Still, a win over the No. 1 team in the country is a great move in the right direction.

After Kentucky’s destruction of LSU, Florida’s loss to the Wildcats does not look as bad.

On top of that, Florida took care of business by shutting out Vanderbilt, 42-0.

Florida will head to Baton Rouge this week to take on a struggling LSU team.

Dropped passes and explosive plays plagued Auburn against Georgia this past Saturday in the 24-point loss.

It is hard to get a read on Auburn. Its two losses were to the No. 1 and No. 7 teams in the country, and the Tigers still control their own SEC destiny.

The rest of their games are winnable, but they are also losable. For that reason, Auburn is the SECs biggest wild card going forward. A loss from here on out, and Auburn’s shot at the SEC title game is bleak.

Tennessee drops this week, but it is more due to the movement of teams ahead of it.

Head coach Josh Heupel’s offense is starting to get going, and a 45-20 rout of South Carolina is a perfect example of that.

Tennessee has a 3-game stretch of Ole Miss, Alabama, and Kentucky coming up.

The Bulldogs were on idle this week, but their win against Texas A&M is starting to look much better.

Mississippi State will be playing host to Alabama on Saturday.

Missouri rises two spots after picking up a much-needed 48-35 win over North Texas.

The Missouri offense was rolling, especially the running game.

The Tigers will look to pick up their first SEC win of the season when they play host to Texas A&M on Saturday.

Things continue to look bleaker and bleaker for head coach Ed Orgeron and the LSU Tigers.

Since the 2019 national championship game, LSU is just 8-8 overall.

With a loss against Florida this week, rumors could turn to action in regards to a coaching change.

The Gamecocks did not show up against the Volunteers as Tennessee went up 28-0 in the first quarter.

South Carolina will look to bounce back against Vanderbilt this weekend.

Vanderbilt once again rounds out the bottom of the list — this time after getting shut out by Florida.

This weekend might present Vandy with its best chance at a conference victory as it takes on South Carolina. The Commodores are still listed as a 20-point underdog.