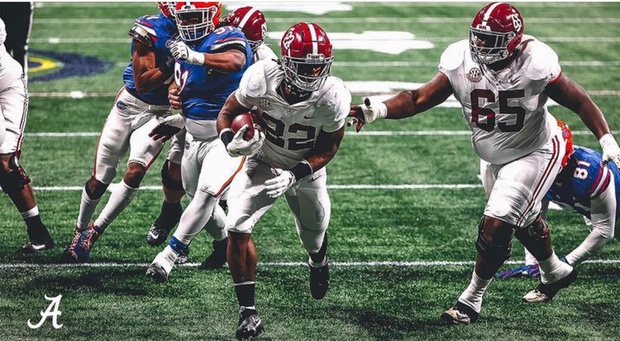 All eyes around the college football world will be on Gainesville, Fla. on Saturday.

In one of just three match-ups of AP-ranked teams this week, No. 11 Florida will play host to top-ranked Alabama in an SEC Championship rematch. Last season’s contest in Atlanta was an absolute thriller as offensive juggernauts traded blows.

The eventual national champion Crimson Tide ultimately held off Florida 52-46 in a contest with 98 combined points and nearly 1,100 total yards. Mac Jones and Kyle Trask put on a show from the quarterback position while Heisman Trophy winner DeVonta Smith and Kadarius Toney did likewise out wide.

Saturday’s contest will be the first regular-season meeting between the schools since 2014 and first in Gainesville since 2011. When it comes to conference title games however, no one has met more often than Florida and Alabama.

The fact that the record comes from the SEC should be little surprise. The SEC was the first to implement a conference title game when it did so for the 1992 season.

It was followed by the Big 12 and now defunct WAC in 1996 and MAC in 1997. Currently, every FBS conference has a title game. The Sun Belt was the last conference to implement a title game in 2018.

Last season’s contest in Atlanta was the 29th SEC Championship. Among those, 10 have been between Florida and Alabama.

The two schools met in the first three SEC championships and four of the first five. Those contests have always had huge implications.

In the inaugural SEC Championship in 1992, it was Antonio Langham’s famous interception return for a touchdown that preserved Alabama’s perfect season and decided the game in a 28-21 victory. The Crimson Tide would go on to win the national championship.

The next four SEC titles would belong to the Gators. Three of those were wins over Alabama, which included a 24-23 victory in 1994. Danny Wuerffel threw the winning touchdown to Chris Doering for Florida. Two years later, Florida rolled to a 45-30 victory over Alabama before topping Florida State in the Sugar Bowl to win its first national championship.

From 1997 to 2007, the teams met just once in Atlanta — a 34-7 romp for Alabama in 1999. In 2008, Tim Tebow accounted for two fourth-quarter touchdowns as Florida rallied past No. 1 Alabama 31-20 en route to a second national championship in three years. The following season, Alabama returned the favor by snapping Florida’s 22-game winning streak with a 32-13 victory before claiming its first national title under head coach Nick Saban.

Since 2008, the Gators and Crimson Tide have met five times. Alabama has won the last four. During the Crimson Tide’s winning streak, only last season’s contest was decided by fewer than 14 points.

Florida and Alabama have each made 13 SEC Championship appearances. Alabama is 9-4 in those contests while the Gators are 7-6. The next most common match-up behind the Gators and Tide is Georgia and LSU, which have met four times.

Regardless of what happens on Saturday, both schools will control their own destiny toward the SEC Championship — although with a much smaller margin for error. The contest begins at 3:30 p.m. ET and airs on CBS.