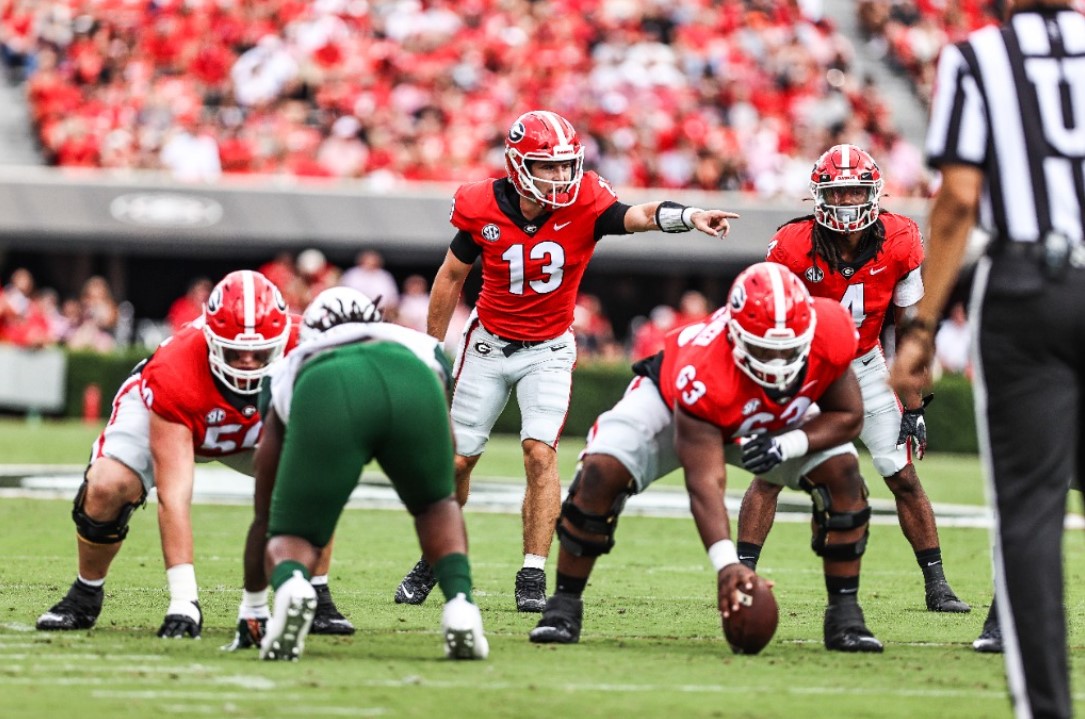 Another week is in the books in the SEC.

Throughout the conference, there were some stellar efforts in Week 2. We hand out our helmet stickers for the top performances from the SEC East.

For the second straight week, Anthony Richardson takes home the helmet sticker following another big performance against South Florida. The quarterback debate between he and Emory Jones continues to grow.

Jones struggled to throw the ball in the ball in a 42-20 victory, and ended up throwing two interceptions and one touchdown for the second straight week. Richardson only threw three passes, but completed all of them and finished with over 150 yards and a score.

On top of that, Richardson broke off another big play with his legs and rushed for 115 yards and two scores on just four carries. Through two weeks, he is Florida’s leading rusher. As we near SEC play, head coach Dan Mullen has a decision to make.

All of Florida’s linebackers were active against USF, but Moon made plays everywhere, including in the backfield.

The senior ended up with five total tackles and a sack. There are multiple big-time playmakers on defense for the Gators. In Week 2, Moon was the best of them.

Bennett had to fill in for the injured JT Daniels against UAB. As he has so many times, Bennett came through when Georgia needed somebody to step up.

Bennett split time with Carson Beck in the absence of Daniels, but Bennett was the difference-maker. The former walk-on completed 10 of 12 passes for 268 yards and five touchdowns in a 56-7 rout.

Those numbers are good enough for the best performance of his career.

Tindall led the way for a Georgia defense that kept UAB off the scoreboard. The only points from UAB on Saturday came via a defensive touchdown.

Tindall led the Bulldogs in tackles with seven and added a sack. The emergence of Tindall gives Georgia more quality depth at an already-loaded position.

Rodriguez finished with 206 yards rushing on 27 carries with three touchdowns. Many view Rodriguez as one of the most underrated players in the country, and it is clear to see why. With an improved passing game, Kentucky is slowly becoming a force offensively in the SEC.

The Ole Miss transfer was expected to be a difference-maker for the Wildcats, and that is exactly what he was against Missouri.

Jones finished with five tackles, but made his biggest mark in coverage with two pass breakups and an interception.

Kentucky outmatched Missouri, but Bazelak looked good all night long. In fact, Bazelak accounted for all four of Missouri’s touchdowns.

He also showed grit by battling through injury to try to make a huge fourth-down play, even though it wasn’t executed.

Alldredge followed up a huge Week 1 with another big night against Kentucky.

Alldredge finished with 13 total tackles, which led the team. At this rate, Alldredge may be on his way to an All-SEC season.

While White isn’t technically on offense, he deserves a helmet sticker.

White went 2-for-2 on field goal attempts against East Carolina, including a walk-off 36-yarder as time expired for a 20-17 victory. White is in his fifth and final year as the starting kicker for the Gamecocks.

It is rare to see a linebacker returning interceptions for touchdowns, but Staley did that against ECU. Staley took one back 63 yards for South Carolina’s first touchdown as the Gamecocks rallied from 14 points down to improve to 2-0.

Hooker threw an interception late that spoiled Tennessee’s chance at a comeback in a 41-34 loss to Pittsburgh, but he also kept the Volunteers in the game.

The Virginia Tech transfer came in for Joe Milton and immediately provided a spark. Hooker completed 15 of his 21 of passes for 188 yards and two scores. He added 49 yards on the ground.

Whether or not Hooker will be the guy behind center going forward is yet to be seen, but he certainly made a strong case this past weekend.

For the second straight week, Jackson finished with 11 tackles, giving him 22 total tackles on the season through two weeks.

Jackson also ended up with a sack, two tackles for loss and a pass breakup. He was all over the field for the Vols and has emerged as one of their best and most consistent players on that side of the ball.

Buvolas didn’t have the best career at Alabama, but he got off to a great start at Vanderbilt by knocking in a last-second field goal to defeat Colorado State, 24-21.

The victory was a big one for the Commodores after getting embarrassed by East Tennessee State.

Orji has become one of the impact players on defense for the Commodores.

The Texas native finished with 13 tackles against the Rams, topping his 8-tackle night in the opener.