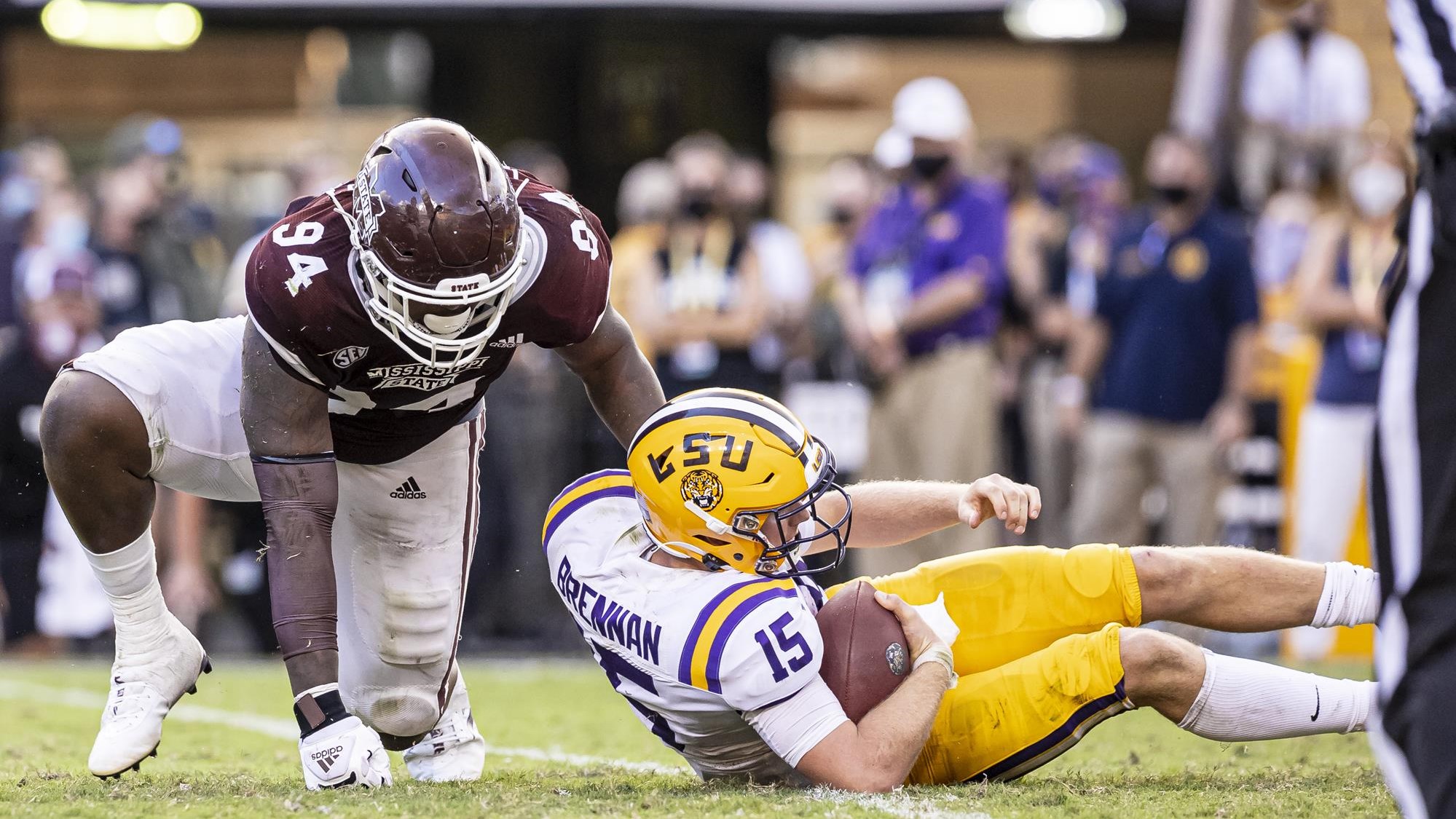 It’s been said many times before, but winning starts up front in the SEC. Our “Buying Stock” series concludes its look in the trenches.

After examining the SEC East defensive lines on Tuesday, we now move to the SEC West. Here’s a look at which defensive fronts to buy and which ones to sell:

The Crimson Tide ranked in the top three in the SEC in rushing defense and sacks last season, and they bring back almost everyone. The lone loss from last year’s national championship team is Christian Barmore, who was selected in the first round of the NFL Draft by the New England Patriots.

Phidarian Mathis, DJ Dale, and LaBryan Ray form one of the best trios in the country. Still, there is a ton of depth behind them. Guys like Byron Young, Damon Payne, and Justin Edoigbe all have some starting experience. On top of that, there are numerous highly-rated youngsters in the back end of the rotation, such as Dallas Turner.

Even with the loss of a first-rounder, the added experience from last year should make this group just as good — if not better than last season.

Arkansas was in the middle of the pack in the conference in rush defense last season. However, it was tied for 13th in the league in sacks. Creating pressure was an issue all season for the Razorbacks in 2020.

Jonathan Marshall is off to the NFL after finishing with 6.5 tackles for loss. Fortunately, the Razorbacks hit the portal hard to relieve that hefty loss. Illinois State transfer John Ridgeway is new to Arkansas, but is the most experienced player on the team. Ridgeway started 29 games in his career, finishing with 80 tackles. Missouri transfers Markell Utsey and Tre Williams will also be key pieces in the rotation. Utsey made 14 starts in five years at Missouri.

This group should improve, but it has a long way to go. Even with a new haul via the transfer portal, depth should be a concern for the Razorbacks.

Auburn struggled to stop the run at times last year, but ranked in the top three in the conference in sacks. This is a group that should make huge strides in 2021.

Despite the loss of Big Kat Bryant, Auburn returns its top edge rusher in Derick Hall. Colby Wooden is also back after finishing with four sacks as a freshman. The middle of the line is the biggest concern, but the Tigers moved tight end JJ Pegues to the defensive line this spring and have one of our instant impact freshmen in Lee Hunter. They also started nose guard transfer Tony Fair who should help anchor the middle of the defense. He was a 2-year starter at UAB.

Speaking of transfers, Auburn added multiple productive guys who happen to have multiple years of eligibility remaining. Those include Eku Leota from Northwestern and Marcus Harris from Kansas.

This is a group that should grow with experience. On top of that, the Tigers add some immediate help from the transfer portal. Not only should this group take a step forward, but it should be one of the best units in the league.

Like Auburn, this was a young group that struggled to stop the run at times, but will continue to grow.

Ali Gaye and BJ Olujari anchor the defense on the edge, and the Tigers have two seniors up the middle in Neil Farrell and Glen Logan. Still, there is tons of depth behind them.

Five-star freshman Maason Smith has a huge upside, and could push for a starting spot by year’s end. At the very least, he is a guy who will be a key part of the rotation as a youngster.

Add these guys with depth pieces like Landon Jackson, Joseph Evans, Andre Anthony, and Jacquelin Roy, and you have one of the deepest units in the league.

Jaden Crumedy and UCF transfer Randy Charlton are the top two guys. Between the two, each have started more than 25 games in their careers. Crumedy finished with 18 tackles in seven starts last season. During his career at UCF, Charlton finished with 10.5 tackles for loss.

Former 5-star Nathan Pickering will be a key part of the rotation. He has a high ceiling and plenty of experience.

Mississippi State has three or four guys it can build around after a fairly positive season.

Ole Miss ranked 10th in the conference in sacks and dead last in rush defense in 2020. So to put it nicely, there isn’t a whole lot to be excited about here.

Ole Miss does return guys with starting experience in Taivus Robinson, KD Hill, Quentin Bivens, and Sincere David. However, the Rebels do lose one starter from a year ago in Ryder Anderson.

Sam Williams mans the BUCK position, where he finished with 9.5 tackles for loss in 2019.

This group has some returning production and adds some talent in the 2021 class. Still, this is a group that is a year or two away.

The Aggies also have a legitimate argument for the best defensive line in the conference, and DeMarvin Leal is a big part of that.

Leal followed up his freshman campaign in 2019 by being named to the All-SEC first team in 2020. In 10 starts last year, Leal finished with 37 tackles and seven for loss.

Outside of Leal, there is still no shortage of talent. Guys like Jayden Peevy and Michael Clemons are both reliable options, and they have no lack of production either. On top of that, they have several youngsters like McKinnley Jackson, Isaiah Rakes, and Tunmise Adeleye who are destined to make a huge impact.

This is an elite group chalked with a nice balance of talent and experience. This is an area of strength for the Aggies, and their defensive success should anchor on the defensive line play.