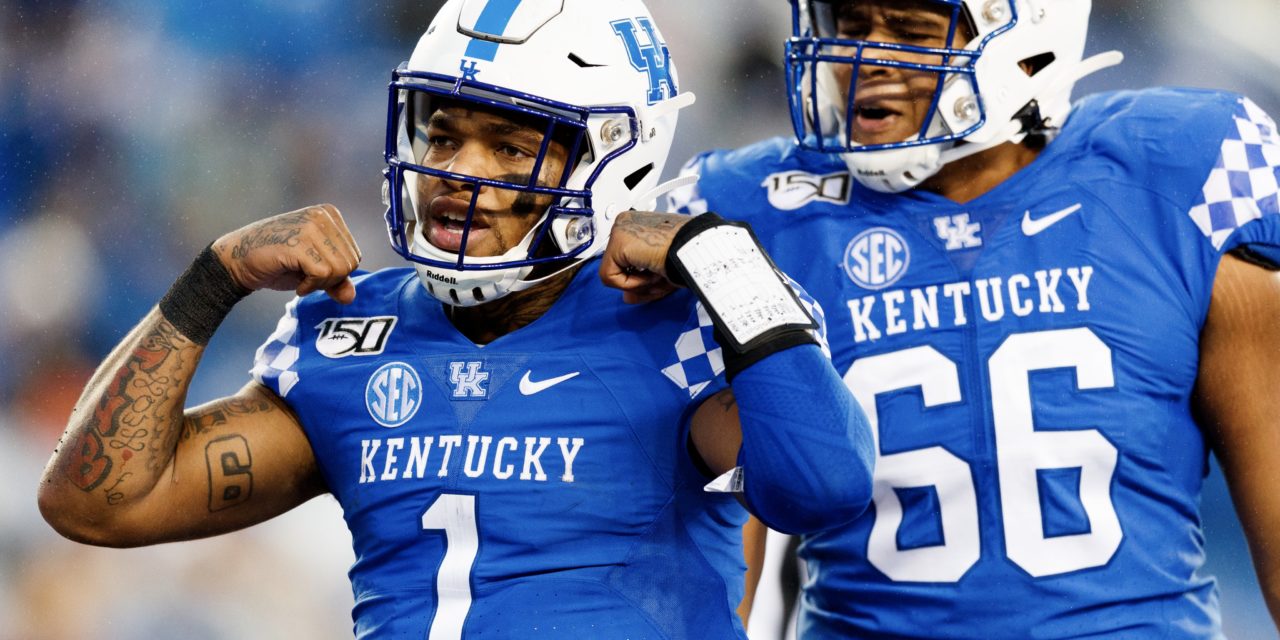 Before Lynn Bowden Jr. led the SEC in rushing yards or shattered high school records, he was a kid in Northeast Ohio – a place which has developed its fair share of football talent.

“From a football point of view, for me, northeast Ohio has got the greatest football ever being played in the United States,” says Bowden. “To me, it was more of a football-based thing for me. Everybody in Ohio has a lot of talent but, unfortunately, some guys don’t get to make it out because of the circumstances they’re raised around or had to adapt to.”

Bowden grew up in Youngstown, a city of around 64,000 people located just west of the Pennsylvania border and 75 miles southeast of Cleveland.

“Youngstown is way different from any other place in Ohio,” Bowden explained. “Don’t get me wrong, every place has bad places, [but] Youngstown is probably one of the hardest places to make it out from because of the way things are going down there.”

Despite the struggles, Bowden quickly found success in high school football. At Liberty High School, a small school just north of Youngstown, Bowden began as a running back before quickly shifting to quarterback.

At quarterback, Bowden found success, averaging eight touchdowns a game. Some questioned the validity of his success due to the lower division. This prompted Bowden, Jr. to transfer to Warren G. Harding High School.

Bowden saw limited playing time at Warren G. Harding. This wasn’t due to his inability, but due to the team’s success on the whole. That didn’t keep Bowden from achieving, however. He finished with the school’s career rushing yards (4,718) and rushing touchdowns (57) records.

“I wouldn’t say in my last two years – my junior and senior year – I played every game, full game. My coach always pulled me out and I ended up with 88 total touchdowns in my last two years combined. In my senior year, I probably played three or four full games,” Bowden said. “It was a great experience playing receiver, quarterback, running back, punt returner. I played kicker, punter.”

Bowden also found success on the basketball court at Warren G Harding, where he averaged 24 points, six rebounds and seven assists per game as a senior, which earned him a spot in the Ohio-Kentucky All-Star Game.

“Basketball was something that I could go to to stay out of trouble and keep myself busy. Some people even tell me I’m better in basketball than I am in football,” Bowden said. “It just kept me in shape and kept me athletic. You know, it kept me with something to do.”

247 Sports’ composite ranking gave Bowden a 4-star ranking, placing him as the third-highest ranked player in Ohio and the 164th-ranked player in the nation. Bowden committed to Kentucky despite holding offers to Indiana, Penn State, Michigan State and Michigan.

“I just felt like I was at home,” Bowden said. I feel like when I got there, I related to everyone there and the coaches being from Youngstown made it even better.”

Bowden saw limited time at wide receiver in his freshman season at Kentucky. The lack of playing time there didn’t mean Bowden tried any less. He earned an All-SEC Freshman Team nod at kick returner. On offense, Bowden finished with 17 receptions and 210 yards and 37 rushing yards on 12 carries. The former quarterback also finished with 92 passing yards on three completions.

As a sophomore, Bowden showed out. He started 12 of Kentucky’s 13 games, finishing with a team-high 67 catches, 745 receiving yards and 6 receiving touchdowns. Bowden also added two punt return touchdowns, becoming one of just three players in the nation to do so. His success earned Bowden a spot on the All-SEC Second-Team as an all-purpose performer.

“Playing against Florida in 2018, playing against [current New Orleans Saints safety Chauncey Gardner-Johnson], he just made to me to I was,” Bowden said. “I saw how hard he was competing and how hard I had to compete.”

Despite the success, Bowden was often overshadowed by running back Benny Snell and pass rusher Josh Allen, both 2019 NFL draftees.

“I just had to be patient. You know, I almost had a breakout season my sophomore year,” Bowden remarked. “I just had to learn how to wait my turn. We had some great players on my team, Benny [Snell] and Josh [Allen], our whole team actually. They pushed me and I pushed them, and I got them better and they got me better for [2019] and the rest of my life.”

Bowden’s breakout season finally came in 2019, albeit at a different position.

Although Bowden started the season as a wide receiver, a rash of injuries at the quarterback position prompted Bowden to offer to switch back to quarterback. Despite throwing few passes in college, Bowden felt he did not have much of a learning curve.

“I always threw the ball like every day. You know, we had plays for me to throw the ball and stuff like that, so I was always loose,” Bowden said. “[Kentucky quarterbacks coach Darin Hinshaw] did a great job with me, working with me, giving me a few pointers and tips.”

Bowden grew up watching and modeling his game around electrifying return man DeAnthony Thomas, who plays for the Baltimore Ravens. Bowden’s switch to quarterback, though, prompted Bowden to begin watching the film of another Raven.

“When they moved me to quarterback, I started watching Lamar Jackson,” Bowden said. “I felt like we were similar, he might be a little faster than me, but I just feel like I move similar to how he moves. So I tried to model after him.”

Bowden quickly turned into a spark under center. Bowden finished with just 403 passing yards and 3 touchdowns through the air. But his bread and butter was on the ground, where he led the SEC in rushing with 1,468 yards. Bowden also added a team-high 13 rushing touchdowns, including a four touchdown game against Louisville. Bowden’s season earned him First-Team All-SEC honors as an all-purpose player.

“It was beautiful because we had a lot of adversity to overcome and it was a lot of things that people thought we couldn’t do that we did. We proved a lot of people wrong and that’s what I love about the team because we were so young and no one had expectations for us to be as good as we were,” Bowden said. “I feel like through all the doubts, we never gave up. They were always behind me. When I moved to quarterback, they were the most supportive group ever in history, and I just want to thank them.”

“It was very tough. I didn’t want to leave those guys, but I have a family I have to provide for. Those things I weighed [when making the decision of] coming back and going to school again,” Bowden said. “If I could just take a couple classes a semester and juggle both of them at the same time, I would have went back and did it with no problem, but I had a family to support and take care of.”

I have a special message for the #BBN. Love y'all 🖤 pic.twitter.com/OqT3XeHgBM

One part of that family is his son, Lynn Bowden III. Bowden credits his son with pushing him toward manhood.

“He’s the reason why I am the way I am. He molded me into a man, he made me a man. I found out I was having him, I had to become a man and he’s the reason why I’m playing as hard as I play and grind as hard as I do,” Bowden said. “He’s my main focus and as long as he’s on this Earth and I’m on this Earth, he’ll never have to question about me and he’ll always know his father is doing the best he can for him.”

Bowden is one of two Wildcats who were invited to Indianapolis to participate in the NFL Draft Combine. Although many teams will likely eye a switch back to wide receiver for Bowden, he hasn’t eliminated the possibility of playing a Taysom Hill-like role for an NFL team, playing a variety of positions – including quarterback.

“On the field, [an NFL team is] getting a straight dog. A winner, a competitor, a top dog,” Bowden said. “Off the field, they’re getting a guy that cares for my son and cares for the community that I’m going to be at. Just a good guy that will never be in trouble.” 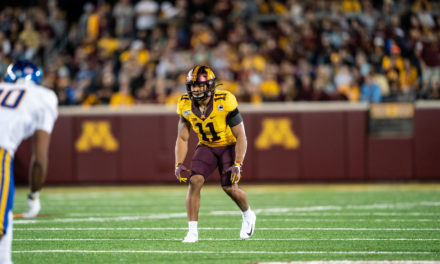 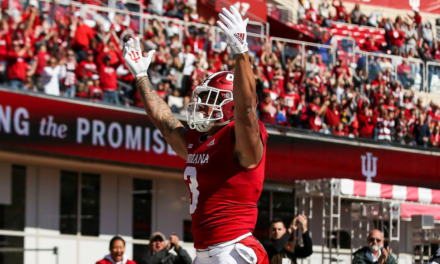