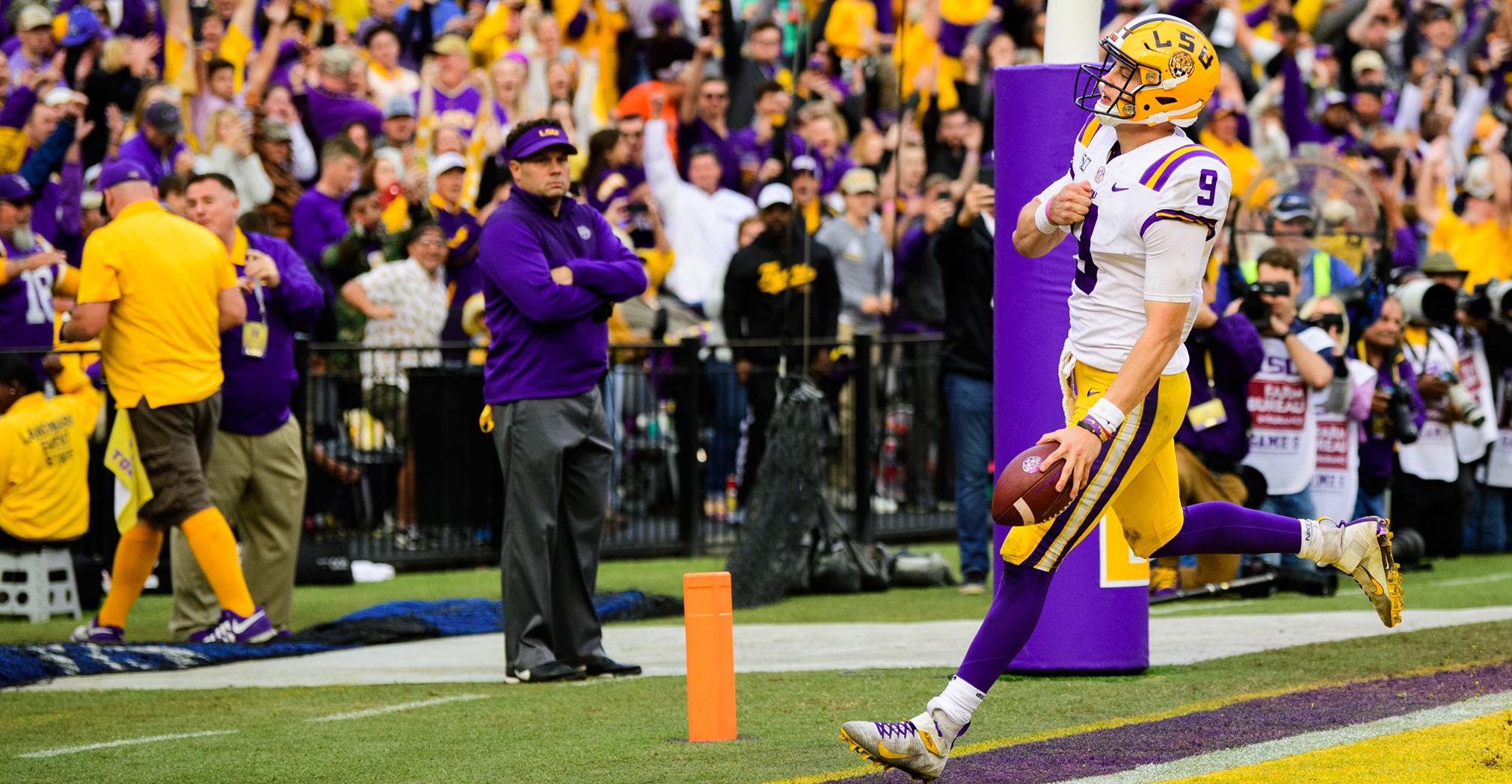 The top two teams in the Associated Press Poll will meet on Saturday afternoon at Bryant-Denny Stadium as No. 1 LSU tries to knock off No. 2 Alabama. The last time either of the two schools played in a No. 1 vs. No. 2 regular-season match-up, it came against each other in the same place in 2011. That night, the teams combined for just over 530 yards, 4 turnovers and no touchdowns.After a miss from Alabama’s Cade Foster in overtime, the Tigers prevailed 9-6 on a 25-yard field goal by Drew Alleman. It remains the last time that Alabama failed to score a touchdown.

Most casual fans are hoping for another competitive contest. In terms of gameplay, though, it will look nothing like the 2011 showdown, in which the teams combined for just 534 yards of offense. This season, LSU alone is averaging 536 yards — about 29 more than Alabama. While LSU and Alabama rank in the Top 25 in total defense, they both rank in the Top 10 in total offense. Credit Nick Saban and Ed Orgeron for adapting with college football by implementing wide open offenses and, in some cases, tempo.

The Tigers have long been known for their vaunted defense – and still are to some extent – but this season, LSU has given up 38 points to both Texas and lowly Vanderbilt. LSU allowed 457 yards and 28 points to Florida. Saban and Alabama have still been stellar by the nation’s standards, but not quite as good as in years past. The Crimson Tide currently rank 18th in total defense, which is the lowest they have ranked in that category since 2007 – the first year Saban coached in Tuscaloosa. While Alabama has held five of its eight opponents to 13 points or less, it yielded 31 points to a 3-6 Ole Miss team and more than 450 yards to a 4-5 South Carolina team.

Most believe that Saturday’s showdown will decide the SEC West, but it could also decide the Heisman Trophy. Entering the contest, Alabama’s Tua Tagovailoa, whose status is up in the air, ranks second nationally in passer rating. LSU quarterback Joe Burrow ranks third in that category. Burrow averages more than 350 passing yards per game, while Tagovailoa averages better than 309 yards per game through the air.

This weekend’s highly-anticipated match-up should not lack for points. In addition to the two high-profile quarterbacks, the teams also combine to have the SEC’s top four receivers in receiving yards per game and touchdown catches in Ja’Marr Chase and Justin Jefferson for LSU and DeVonta Smith and Jerry Jeudy for the Crimson Tide.

If there is one major similarity, it’s that Saturday’s loser is in no way out of the national championship hunt. Following the victory in 2011, LSU completed a perfect regular season and win the SEC before losing to Alabama in a BCS National Championship rematch, 21-0. With Clemson and the Big Ten champion looking like the only teams in the driver’s seat for a playoff berth, the loser could wind up receiving the final playoff bid and a chance at revenge. This weekend’s match-up between the Tigers and the Tide begins at 3:30 p.m. ET and will air on CBS.