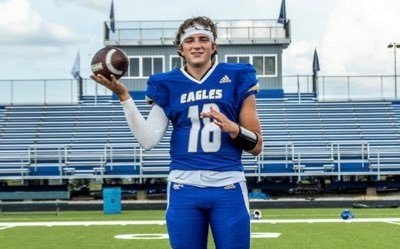 If quarterback Cooper Stone isn’t yet on your radar, he soon will be.

In addition to his great passing numbers, the quarterback added six rushing touchdowns while leading Bethlehem High School to an 11-3 record. As for Stone, he earned first-team all-district honors.

Stone is one of the top talents behind center in the great state of Kentucky and that isn’t changing any time soon. Stone is expected to have a huge offseason in which he’ll be attending multiple mega camps and showcases as he enters his senior year. He wants to show college coaches that he is ready to come in and compete.

Stone is getting the attention of several schools in the local area, particularly Morehead State. A stellar FCS program in the Pioneer League, Morehead State has a proud history at quarterback that includes New York Giants’ legend and Super Bowl XXI MVP, Phil Simms.

Stone’s arm isn’t only an asset on the gridiron, but on the diamond as well. He is one of the top pitchers in the state. Stone possesses a fastball that has been clocked at nearly 90 miles per hour.

As a hurler last season, Stone posted a 4-1 record and tossed a no-hitter. He has garnered the attention of a handful of Ivy and Pioneer League schools, particularly Columbia. Wherever Stone lands will be getting a gem of a multi-sport athlete.

“Cooper is definitely one of the best 2023 quarterback prospects we have,” said Coach Lou Perrone from ‘My Recruits’. “There’s a lot of schools that he tops the board on.”