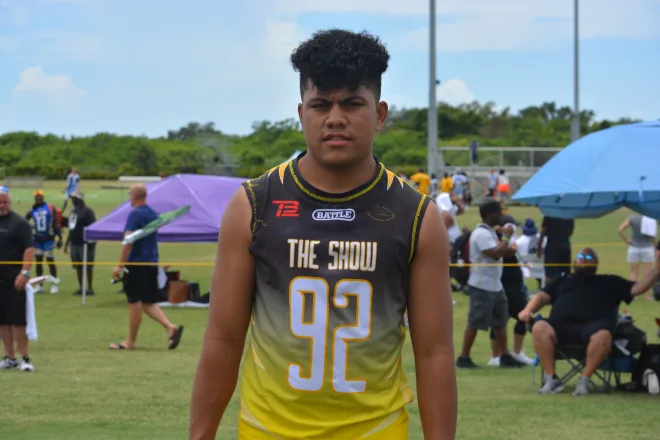 At 6-foot-3 and 230 pounds, Maile hasn’t been receiving the attention he deserves. Utah State found a gem in-state.

Many expect big things from him in Logan. We caught up with Maile to ask him some football questions and why he committed to Utah State.

1. Heading into your senior year, what is your No. 1 goal?

I feel like my No. 1 goal is a high goal, but a goal nonetheless. I hope to lead the state in sacks.

2. If you had to compare your style to a NFL/college defensive end, who would be the closest to your style?

As far as I feel like I can make a safe comparison with, it would be Cameron Latu at Alabama, simply because I used to study his techniques watching the Nike Opening 1-on-1s when I was younger.

3. What major/degree are you hoping to pursue in college?

I really want to pursue a career in real estate or maybe go into a field of engineering.

My favorite football memory would have to be my game against Jordan. I kept messing up and lost my assignment and I got a pep talk from my coach after a timeout and that same drive, I ended up getting two back-to-back sacks and a couple tackles and was the defensive line MVP that game.

5. Did you ever visit Utah State before committing to them?

I did visit Utah State after (my) sophomore year at Junior Day.

6. What stuck out to you about playing at USU?

What stuck out to me was their emphasis on players as individuals.

7. What was the ultimate reason to attend USU?

My reason for attending was not only education, but to better myself at a program where I can be treated as an individual rather than just a football player.

8. If you could talk to one former Utah State Aggie, who went to the NFL, which player would it be?

I would want to speak to Bingham alumni Daniel Langi on his transition to Bingham football to Utah State football. I feel like that would really be something special that could only apply to me.

9. Would you be willing to change positions if a coach asked you?

I would be willing to move anywhere for the sake of the team.

10. Do you plan on enrolling early when it is time to attend college?

I feel like I wouldn’t be in a rush to attend earlier than usual.

11. Obviously the NFL is the ultimate goal; besides that, what do you want to do post-college career?

I would like to take my degree and utilize it to get a job, preferably something in real estate and purchase and sell properties.

12. What is a fact about you that most do not know about you?

People usually are surprised at the fact that I am an extremely good cook.

13. Who was your role model growing up?

My biggest role model growing up was my mother; she worked two jobs and went to school, so she was the hardest worker I knew.

14. What is your favorite drill to do in practice?

My favorite drill by far would be tackling circuits, because of the fact we get to hit.

15. What is your favorite meal?

By far, my favorite meal would be barbecue wings and ranch.

16. What are some of your hobbies besides football?

I like to cook. It’s my second favorite thing to do.

18. What is one thing you love about your hometown?

I love the legacy my hometown holds. Bingham has had 11 state titles — the most in Utah — so the Bingham legacy is huge where I’m from.

My favorite vacation area would be Cali(fornia) for sure: the beaches, the food, the entertainment. It’s undefeated.

20. Do your parents care where you go to school, meaning do they mind you being far from home to achieve your dream?

My mom doesn’t really care; she really just wants me to get a good education.