Dang, these kids are good.

Now I’m not here to say that Maine is a lock for the NCAA Tournament and that FSU is the best ever…but I like what I see.

And what I saw was a combined no-hitter.

FSU had very few issues with the Maine Black Bears, sweeping them in a 4-game series. The closest game was the second game of the Saturday doubleheader – a game won in walkoff fashion by the ‘Noles.

Since FSU Baseball doesn’t have the following of football, or maybe even basketball, I plan to do wrap-ups in a more top-level fashion, looking at the series as a whole (including a mid-week game, if there is one). Baseball can be weird sometimes, and so I feel that drawing conclusions out of a singular game doesn’t always lead to good reporting. So, without further ado, some conclusions from this weekend’s tilts against the Black Bears.

View from the Press Box

View from the Dugout

What’s Next for the ‘Noles

I’m writing this piece late, so we’ve already postponed the game against Jacksonville. Next up is the Youngstown State Penguins in a 3-game set, with another Saturday double-header die to impending bad weather Sunday. The Penguins are coming off a 3-game sweep at the hands of Mississippi State. Go to the game. Have fun. Watch the offensive fireworks. No stress this weekend. 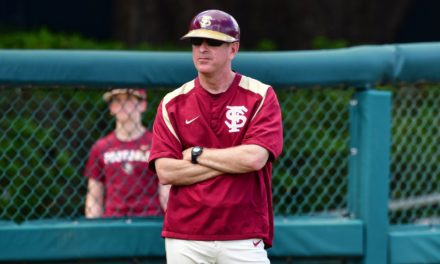